Reds switchThe major transfer news at Old Trafford this month has of course surrounded the arrival of starlet Diallo.The 18-year-old was at the heart of one of a number of deadline day deals struck by United this past October, when he joined Edinson Cavani, Alex Telles and Facundo Pellistri in putting pen to paper on terms […]
101 great goals - 31 minutes ago

Smith Rowe shinningThe majority of the season to date has been spent with Arsenal seriously struggling for form.The Gunners fell as low as 15th in the Premier League table, and looked more and more like being dragged into the relegation battle as the weeks passed.However, Mikel Arteta’s side have since gone unbeaten in their last six […]
101 great goals - 59 minutes ago

The Norwegian international only turned 22 last month but it's been a dramatic career of ups and downs so far. The post 7 stages of Martin Odegaard’s career: Teenage prodigy to Arsenal-bound – PF appeared first on teamtalk.com.
planet football - 1 hour ago

The Saints boss felt his men could have buried the game earlier but is pleased to still be in the hat for the next round. The post Hasenhuttl pleased with Arsenal scalp but two Southampton issues rankle appeared first on teamtalk.com.
team talk - 1 hour ago

Van de Beek’s struggles for actionManchester United’s first signing of the summer came in the form of Donny van de Beek.The 23-year-old made the move to Old Trafford from Ajax, for an initial fee of around £35m.Van de Beek had proven one of Ajax’s standout performers over the last couple of seasons, playing a key role […]
101 great goals - 1 hour ago

Tottenham vs WycombeThe FA Cup returns to our screens this weekend.One of the final ties of the 4th round will see Tottenham make the trip to lower-league outfit, Wycombe.Spurs head into the game on the back of a 3-1 win over Sheffield United last weekend.The Lilywhites would also hammer Marine 5-0 in the previous round […]
101 great goals - 2 hours ago

The Gunners finally woke up but it was too little too late, with Southampton worthy winners at St Mary's. The post Late rally in vain as Southampton dump holders Arsenal out of FA Cup appeared first on teamtalk.com.
team talk - 2 hours ago

The Spaniard moved to China in July 2019 after his contract at Newcastle expired - but the former Liverpool boss is now back on the market The post Rafa Benitez back on market as Covid is blamed on Chinese exit appeared first on teamtalk.com.
team talk - 3 hours ago

Man United go topManchester United were in Premier League action on Wednesday evening.After Manchester City and Leicester had picked up wins earlier in the week, the Red Devils were aware that they needed to see off Fulham to ensure an immediate return to the English top-flight’s summit.And though Scott Parker’s men went on to put […]
101 great goals - 3 hours ago

The Reds need a lift and speaking to someone who knows all about the pressure of playing for the club might be a shot in the arm. The post Pundit urges misfiring Liverpool star to seek legend’s counsel appeared first on teamtalk.com.
team talk - 4 hours ago

The player joined the Reds in an eight-figure deal this summer, but has yet to find his feet at Anfield The post EXCLUSIVE: Liverpool stand firm as two bids arrive for summer signing appeared first on teamtalk.com.
team talk - 4 hours ago

It has been an excellent season for the Toffees to date but the experienced coach is keeping everyone at the club grounded. The post Ancelotti expects two clubs to join race and sets limit of Everton ambition appeared first on teamtalk.com.
team talk - 4 hours ago

Heavy rotationMikel Arteta knows that with a congested fixture list plenty of rotation was going to be expected ahead of Arsenal and FA Cup 4th round tie against the Southampton. The Spanish coach decided to leave in form Gunners starters Pierre-Emerick Aubameyang, Emile Smith-Rowe and Kieran Tierney out of the squad altogether with a repeat […]
101 great goals - 5 hours ago

Merson informs Lampard of maverick appointment that can prevent sack

In his hour of need, under-fire Blues boss Lampard has been urged to turn to an experienced family figure for help The post Merson informs Lampard of maverick appointment that can prevent sack appeared first on teamtalk.com.
team talk - 5 hours ago

The Gunners are keen to do a deal on the cheap but need clarity on the length of a target's deal before making their move. The post Contract confusion likely to postpone Arsenal move for Palace starlet appeared first on teamtalk.com.
team talk - 5 hours ago

Mbappe would stay long-termFrench international forward Kylian Mbappe has provided the best indication that his long-term future lies with his current club PSG instead of a possible move abroad to Real Madrid.The 22-year old discussed his future and spoke about the contract talks which are ongoing and confirmed that should he decide to renew his […]
101 great goals - 5 hours ago
LOAD MORE SPORT

Newcastle manager Steve Bruce is glad to have striker Callum Wilson available to face Crystal Palace as a few squad members are absent due to coronavirus.

Wilson started the Magpies first eight league games of the campaign, scoring six times including a brace against Everton. That was in a 2-1 victory at St James Park – the last time Bruces men took all three points.

They have lost their last two – a 2-0 defeat to Southampton and a 2-0 reverse at home to Chelsea.

Wilson, 28, missed the Blues clash after picking up the injury against Saints but is ready face Crystal Palace. Bruce is happy to have the England man back after the way he has performed to date.

Hell be fit. Hes trained all week, he said. We didnt think we could risk him (against Chelsea). He will be available which were delighted about.

Already hes made a difference. Hes got six goals in eight games in the Premier League. Were delighted hes returned.

Jonjo Shelvey and Matt Ritchie are also available following respective hamstring and shoulder problems. The boss also revealed that members of his squad have been affected by the pandemic but is remaining upbeat.

COVID is one problem we have to manage but I dont really want to go into individuals, he added. We have got two or three individuals in the training ground at the moment who are self-isolating. Were not as bad as most. Weve got Jonjo, Matt Ritchie and Callum Wilson back, they can only be positives.

The Tynesiders may have slipped to 15th in the top-flight standings but are still well clear of the drop zone. Seven points separates the north-east outfit from Fulham in 18th but Bruce is in no mood for complacency.

We have to accept that we didnt play well enough. In those particular games both teams to beat us go top of the league, he added. Theyre in a rich vein of form, we have found it difficult.

Crystal Palace is an ideal opportunity to try to bounce back and put in a performance like we did against Everton, which was only three weeks ago by the way. 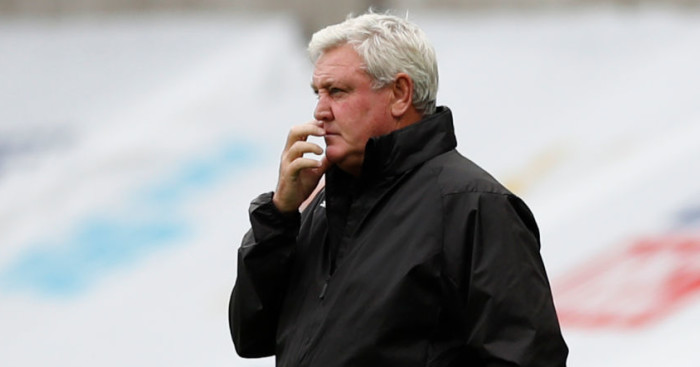 Following the Palace clash, the men in black and white face a trip to the West Midlands to take on Aston Villa. Slaven Bilic’s West Brom will then be the visitors on December 12, with games in the run-up to Christmas looking winnable.

Gabriel deflection helps Southampton dump Arsenal out of FA Cup Arsenal have shrugged off the “cup team” tag for now, but not in the way they would have wanted. Their hopes of retaining the trophy are over after a first-half own goal by Gabriel won this tie for Southampton, who deserved to book a fifth-round trip to Wolves even if they were required to hold on as the minutes ticked down. Mikel Arteta flung on the cavalry in an attempt to keep Arsenal’s interest alive but they could not muster an equaliser and, on this evidence, their hosts might fancy a deep run of their own over the coming months. Continue reading...

Southampton 1-0 Arsenal: Gabriel own goal knocks FA Cup holders out A strong Southampton side knock holders Arsenal out of the FA Cup at the fourth-round stage thanks to a first-half own goal.

Are fans allowed at Super Bowl in 2021? NFL tickets & attendance policy changes for COVID-19 Super Bowl 55's ticket purchasing and attendance policies are impacted by COVID-19, which will prevent Raymond James Stadium from being full for the big game on Feb. 7, 2021.

Where is the Super Bowl in 2021? Location, city, stadium for Super Bowl 55 and beyond Super Bowl 2021 will take place at Raymond James Stadium in Tampa, Florida, with three of the four years beyond that also already determined by the NFL.