Aubameyang bemoans Arsenal’s lack of goals Arsenal were held to a 0-0 draw by Leeds over the weekend. Said draw will have no doubt only further deepened the concern surrounding Arsenal’s attacking issues of late. The Gunners have scored just a solitary goal in their last five Premier League outings, which was Pierre-Emerick Aubameyang’s penalty […]
101 great goals - 11 minutes ago

Arsenal have this evening released a statement, confirming that supporters will be permitted to attend the club’s upcoming Europa League meeting with Rapid Vienna. Empty stadiums take their toll To say that fans have been sorely missed from stadiums across England this year would be putting it lightly. Whilst the Premier League has continued to […]
101 great goals - 22 minutes ago

The Gunners striker has had his say on the club's current malaise - and how they will get out of it The post Aubameyang names Arteta’s ‘biggest problem’ amid Arsenal slump appeared first on teamtalk.com.
team talk - 26 minutes ago

The defender is yet to feature in the Premier League this season, but has found more opportunities in the Europa League The post Arsenal squad man admits he does not know reason for Arteta snubs appeared first on teamtalk.com.
team talk - 45 minutes ago

Tottenham boss Jose Mourinho has promised more to come from striker Carlos Vinicius and even floated the prospect of him playing alongside Harry Kane.

The Brazilian was handed his debut in the Europa League Group J game against LASK and made a good impact, creating two goals in a 3-0 win in north London.

He set up goals in either half for Lucas Moura and Son Heung-min and would have opened his account had Andres Andrade not turned a Gareth Bale cross into his own goal.

Mourinho was enthused by his debut and says he can be more than just a deputy to Kane.

He played well but he can do better, Mourinho said. It is a bit of a shame still, it is not easy not to speak English so the adaption to the group, in spite of having amazing guys that try to make him feel well, is not easy.

He is still in a learning process, Vinicius can be much more than this. But first match I am really happy, the only thing that was missing was a goal.

But we can see he is much more than he is not selfish, he is a good target man, he can even play with Harry Kane when his good period arrives.

He can play with Harry and not just be the guy to cover him. I am very happy and the feelings over everyone in the squad are good towards him. 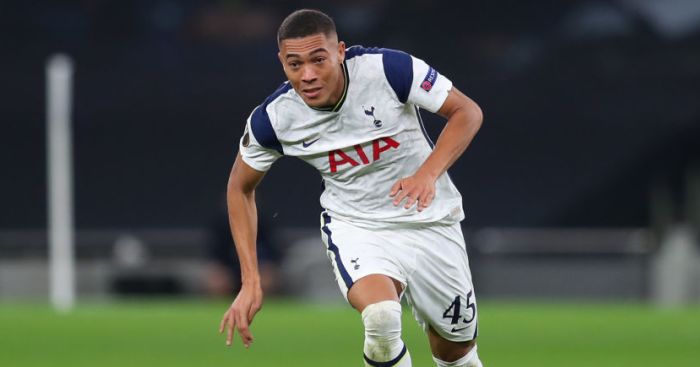 Kane had a rare watching brief from the bench and he saw Vinicius getting involved from the off.

He got off to an inauspicious start, missing a sitter from eight yards out, but grew into it and set up Mouras 18th-minute opener with a good piece of play.

Gareth Bale was supposed to be the story of the night, making his first start of his second spell at the club, and he almost laid a goal on for Vinicius, but his cross was turned into his own net by Andrade.

Vinicius then teed up Son in the final 10 minutes to complete a memorable debut for the club.

It was an evening that highlighted the strength of the Spurs squad, with Mourinho making eight changes, with left-back Ben Davies being used in a central defensive role.

The Welshman impressed Mourinho who says he does not have to alternate with fellow left-back Sergio Reguilon.

A little bit like Harry and Vinicius, Mourinho said. When were speaking about Vinicius being a good player too and say he only plays when Harry doesnt, its good that Vinicius can play with Harry.

Ben and Reguilon is a little bit the same. Can they play together or for one to play and the other one has to be on the bench? Yes they can play together and thats a very good thing for us.

Of course left-footed there are not many centre-backs with a left foot. Some clubs have them but the majority dont.

To have him as an option is also good because to attack, the build-up is also important.

LASK were never in the game and their head coach Dominik Thalhammer knew the task was too big.

It is a Champions League team, so our view has to be realistic, he said. You have to recognise there is a gap between the two teams. You cant expect to come here and win, Tottenham are a top team with fantastic individual players.