Foden’s night Foden’s sole goal was enough to see Manchester City push aside Olympiacos and qualify for the knockout stages of the Champions League. Sterling found the England international with a brilliant spatially aware backheel and the 20-year-old tucked away the chance comfortably. “Sterling is a great player in those areas and somehow he saw […]
101 great goals - 9 hours ago

Vidal chaos Inter Milan’s vital game against Real Madrid was marred by the chaos of Arturo Vidal and Anthony Taylor. The Chilean was sent off with back-to-back yellow cards in the space of seconds. Vidal charged into the Madrid box, Luka Modric handling the midfielder but the incoming Raphael Varane managed to tap the ball […]
101 great goals - 10 hours ago

In form Foden bangs in another goal as Man City reach the Champions League last 16 in Greece The post Pep reveals fatigued pair missed out, as Foden fires Man City through appeared first on teamtalk.com.
team talk - 11 hours ago

"Albert knows him very well. It is a player that he likes. But we have not showed any interest for the player." The post Arteta denies interest in ‘unique’ midfielder pulling up trees in Premier League appeared first on teamtalk.com.
team talk - 11 hours ago

Reds field two teenagers in defence as they seek to secure automatic qualification with two games to spare. The post No Jota for Liverpool as Klopp rings changes for Atalanta double bid appeared first on teamtalk.com.
team talk - 12 hours ago

No rest for the weary Tottenham Hotspur have found themselves joint top of their Europa league group after two wins and a defeat, level with both LASK and Antwerp. The 1-0 loss to the Belgian side has meant that Jose Mourinho may be forced into a stronger team selection than he may have liked ahead […]
101 great goals - 12 hours ago

'One of the best ever. An unparalleled magician.'
metro - 13 hours ago

The defender is willing to return to his former club in January, but needs to make a huge sacrifice to do so The post Arsenal misfit to sacrifice €100,000-per-month to leave on loan appeared first on teamtalk.com.
team talk - 13 hours ago

Balogun talks reopen Arsenal manager Mikel Arteta spoke ahead of the Europa League fixture with Molde and confirmed that the club are working on a new extension to Folarin Balogun’s contract. The 19-year-old scored 34 goals in 33 appearances for Arsenal’s under-18 squad and has 15 goals in 36 kunder-23 appearances the Premier League 2. […]
101 great goals - 14 hours ago

The Toffees manager has requested that the club approaches to sign the Spaniard in the upcoming winter transfer window. The post Ancelotti to make Everton move for Serie A sensation he ‘fell in love’ with appeared first on teamtalk.com.
team talk - 14 hours ago

One of football's greatest ever players passes away after suffering a cardiac arrest at home. The post Argentine legend Diego Maradona dies aged 60 appeared first on teamtalk.com.
team talk - 14 hours ago

The World Cup winner required surgery for a blood clot on his brain earlier this month.
metro - 15 hours ago

Moura is confident that Jose Mourinho will end their long wait for a trophy - and it could even be the Premier League The post Tottenham star Lucas Moura avoids comparing Mourinho and Pochettino appeared first on teamtalk.com.
team talk - 15 hours ago
LOAD MORE SPORT

Real Madrid fell to a shock 3-2 defeat at home to an under-strength Shakhtar Donetsk in a stunning Champions League upset.

Shakhtar had to field a weakened team as a result of coronavirus cases, but the Ukrainian underdogs tore Real to shreds as they raced into a 3-0 lead in an incredible first half.

Luka Modric and Vinicius Junior pulled goals back after the break but they were unable to avoid a humiliating loss.

Real were playing at their 6,000-capacity Alfredo Di Stefano training ground as building work takes place at the Bernabeu, but it is Zinedine Zidanes squad which looks in need of some major renovation.

They were desperate to bounce back from a surprise 1-0 defeat by Cadiz at the weekend, but things quickly went from bad to worse for the 13-time European champions.

Shakhtar gave them a scare after 15 minutes when Marlos burst through one-on-one with Thibaut Courtois.

But the wingers finish was too close to Courtois with the former Chelsea keeper saving with his legs.

However, it was a sign of what was to come and Courtois could do nothing to prevent Tete opening the scoring with a low finish after a strong run from full-back Viktor Korniienko. 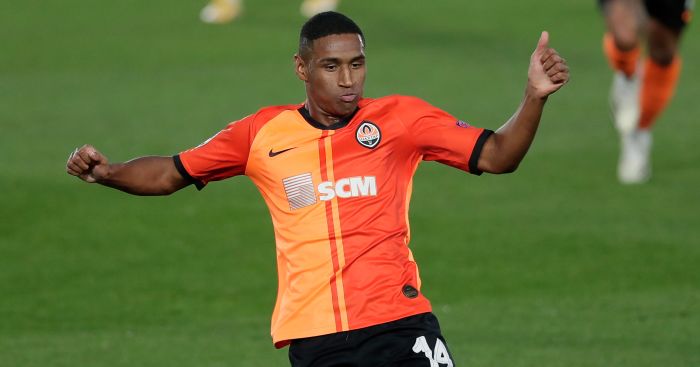 Three minutes later the visitors had a second, Courtois parrying Tetes shot only for defender Raphael Varane to prod the rebound into his own net.

Manor Solomon capped a remarkable first half with the third, latching onto Tetes backheel and rolling the ball into the bottom corner.

Zidane threw on Karim Benzema at the break and they pulled one back eight minutes into the second half with a curler from Modric.

Substitute Vinicius Junior then scored within seconds of joining the action with a blistering run and shot.

Shakhtar could have gone further ahead but Courtois made a crucial save to deny Tete before Marlos had a goal ruled out for offside.

Real probed for an equaliser but Benzema was denied by a last-ditch block and Eder Militao fired over.

In stoppage time Federico Valverde thought he had spared Reals blushes with an equaliser but it was ruled out after a video check as Vinicius Junior was offside.