The Seagulls boss has been quick to laugh off suggestions his star defender could be set for a huge transfer to Anfield in January The post Brighton boss delivers sarcastic reply over Ben White links to Liverpool appeared first on teamtalk.com.
team talk - 8 minutes ago

Fuming Inter Milan are furious that new signing Achraf Hakimi was unable to play against Borussia Monchengladbach. The Italian club were informed by UEFA that the Moroccan international had tested positive for coronavirus. However, the club claim the former Real Madrid wing-back was asymptomatic and, further to that, tested negative a day after the game. […]
101 great goals - 16 minutes ago

The Royals' promotion-chasing side could be picked off in January with a pair of their players attracting interest, TEAMtalk has learned The post EXCLUSIVE: Leicester lead West Ham, Newcastle as Reading duo catch eye appeared first on teamtalk.com.
team talk - 51 minutes ago

Everton boss Carlo Ancelotti has confirmed that James Rodriguez has not yet been ruled out of the club’s upcoming meeting with Southampton. Everton flying high The Toffees are set to return to Premier League action on Sunday afternoon. Ancelotti’s men will of course head into proceedings brimming with confidence, on the back of a stellar […]
101 great goals - 18 hours ago
LOAD MORE SPORT

Arsenal are nudging ever nearer to a deal for Houssem Aouar after the Lyon star emerged as Mikel Arteta’s No 1 transfer target.

Arteta wants to revamp his midfield and wants Aouar as well as Atletico Madrids Thomas Partey.

Arsenals hopes of securing Aouar received a timely double lift earlier this week. As per Italian journalist Nicolo Schira, Aouar agreed a five-year deal with the Gunners two weeks ago.

He added that Arsenal are yet to agree a deal with Lyon, but they will now up their efforts to secure an agreement with the Ligue 1 side.

Now their chances appear to have moved forwards with the Gunners’ seeing their hopes further boosted.

According to Calciomercato, Lyon have now decided they won’t stand in the player’s way if Arsenal make an acceptable bid.

Although, not under any pressure to sell, Lyon know their captain has his heart set on a move to Arsenal.

As such, the Italian outlet claims Lyon have already identified his successor in the form of AC Milan star Lucas Paqueta.

The Brazilian playmaker was left out of their Europa League squad to face Shamrock Rovers and looks likely to leave.

Paqueta is rated in the £25m bracket. While talks are yet to get underway, it’s not thought a deal will be hard to negotiate.

Lyon are reported to be ready to sell Aouar for around £40m to help finance that deal.

Arteta was quizzed on his interest in the player, though opted to give little away.

I cannot talk about players that arent at our football club,” Arteta insisted.

The Gunners boss, however, was more more forthcoming on their hunt for a new keeper.

With the departure of Emi, a big loss, we have to replace him,” Arteta added. “In football, the hours can become days. I cannot tell you.

Depending on what happens with the goalkeeping position. The market is still open but thinks can change.

Signing Aouar would prove a huge coup for the Gunners, who are improving all the time under Arteta. 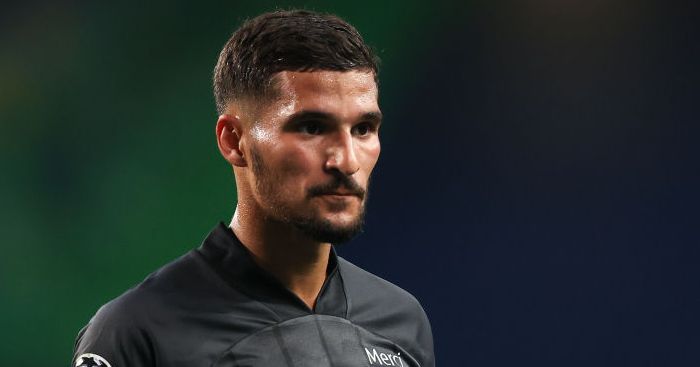 He believes there would be a tactical tweak from Arteta, saying: I think the idea is to move to a 4-3-3 anyway at some time and then Aouar could play in midfield. Aouar can play in a 3-4-3, in the two in midfield.

“He runs a lot although he doesnt have the defensive-minded approach.