Man City hammered Manchester City had a decent start to 2020/21, seeing off an in-form Wolves side. As a result, they probably felt pretty confident about getting something from their latest clash vs Leicester. However, the Sky Blues would collapse in rather spectacular fashion vs the Foxes. Riyad Mahrez would fire the home side into […]
101 great goals - 23 minutes ago

The goalkeeper has not played for Liverpool since 2018, and is now set for another loan spell away from Anfield The post Liverpool flop in ‘good mood’ as medical begins before Bundesliga move appeared first on teamtalk.com.
team talk - 24 minutes ago

Arteta has spoken about why he's happy to abandon the Gunners' philosophy in search of wins and provided an update on their transfer plans The post Arteta offers downbeat update on Arsenal deals for Aouar, Partey appeared first on teamtalk.com.
team talk - 2 hours ago

Pep Guardiola admitted he was "anxious" after Manchester City suffered a 5-2 defeat at the hands of Leicester. The post ‘Anxious’ Pep Guardiola reveals the ‘extra pressure’ that caused Man City to lose to Leicester appeared first on teamtalk.com.
team talk - 16 hours ago

A stunning effort from the Royals.
metro - 16 hours ago

The latest word stemming from the European media this evening suggests that out-of-favour Manchester United midfielder Andreas Pereira is all set to join Serie A outfit Lazio on loan. Reds struggles 24-year-old Pereira, a product of the Red Devils’ youth system, has of course found game-time difficult to come by over the early weeks of […]
101 great goals - 17 hours ago

A painful defeat for Murray in Paris.
metro - 17 hours ago
LOAD MORE SPORT

Rotherham have boosted their attacking options by securing the services of Leicester striker George Hirst on a season-long loan.

The 21-year-old frontman passed a medical on Tuesday. And now he’ll try his luck at the Championship club, who opened the campaign with a 1-0 win at Wycombe.

The move marks a return to South Yorkshire for Hirst.

The 21-year-old was on the books of Sheffield Wednesday but failed to make the same impact there as his father and former England international David.

Indeed, Hirst left Wednesday under a cloud in 2018.  He made just two first-team appearances and refused to sign a new contract.

His next move was overseas to Belgian club OH Leuven.

The England youth international signed for Leicester in July 2019 and made two Premier League appearances at the end of last season.

For his debut, Hirst got just seven minutes in a 3-0 defeat at Tottenham and was also a late substitute in a 2-0 home reverse against Manchester United.

But he’s shown his talents in Leicester’s U21 squad with four goals in seven appearances.

That included the winner from the penalty spot in the 2-1 EFL Trophy win over Hull at the KCOM Stadium earlier this month.

Warne gets his man after two-year wait 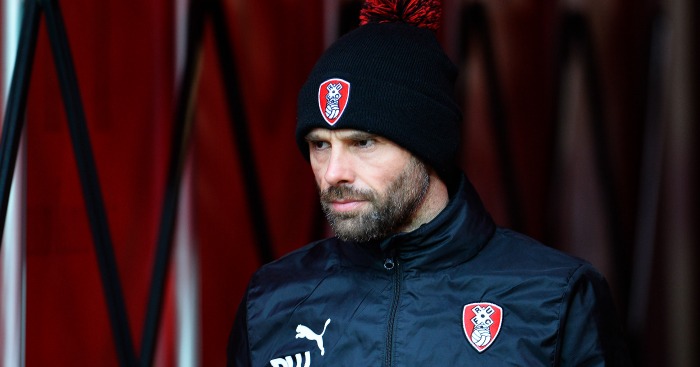 Rotherham boss Paul Warne is a long-time admirer of Hirst and tried to sign him two years ago on loan.

Warne had tipped fans off about a Premier League loan signing.

He told TheStar: “I’m really hopeful that I will have another striker in this week.

“In this league, you can be good box to box – which we were the last time we were in the Championship – but sometimes you need someone to do a bit of brilliance inside the area and get you a win.

“That’s why the strikers earn the big money: they change games with bits of class. We do need more competition up top, a real goalscorer.”

And after securing the deal for Hirst on Wednesday, Warne told the Rotherham Advertiser: “He’s developed really well physically.