If you want to see Le Tiss impersonate a vulture or Thompson in a headband shouting "mummy", now's your chance The post Watch: Thommo wails ‘mummy’ as pundits prepare for Qatar in sitcom appeared first on teamtalk.com.
planet football - 8 minutes ago

Pep Guardiola has recently provided a rather negative update on Manchester City forward Sergio Aguero. Wolves vs Man City After being handed an extended break due to their European commitments, Man City are finally set to return to action in the coming days. The Sky Blues face a trip to Wolves for their first Premier […]
101 great goals - 34 minutes ago

Jota arrives Liverpool transformed their transfer window from a relatively quiet summer to a sudden splashing of cash. The Anfield club only recently wrapped up a £25 million deal for Bayern Munich’s Thiago Alcantara and now look set to spend a further £45 million of Wolverhampton Wanderers forward Diogo Jota. The deal could even happen […]
101 great goals - 56 minutes ago

Bale’s signing would represent a major coup for Tottenham, but Gerrard is more excited about his old club doing a deal for Thiago Alcantara. The post Gerrard has ‘butterflies’ over Liverpool signing; reacts to Bale return appeared first on teamtalk.com.
team talk - 1 hour ago

The return Bertrand Traore has joined Aston Villa from Lyon in a deal that may eventually rise to £19m. The Burkino Faso international returns to the Premier League having left Chelsea for the French club 3 years ago. Traore’s 3 seasons at Lyon were indifferent. A bright start seeing the winger score 18 goals in […]
101 great goals - 1 hour ago

City will reluctantly decide to sell the 6ft 5in defender before the transfer window shuts with a number of clubs asking about a deal The post EXCLUSIVE: West Ham, Leeds linked as Man City decide to sell defender appeared first on teamtalk.com.
team talk - 1 hour ago

'I liked that he asked for that advice.'
metro - 2 hours ago

While Sir Alex Ferguson made some incredible signings at Man Utd, he also knew when to let players leave – some notable exceptions aside. The post Where are they now? The last 10 Man Utd players sold by Fergie – PF appeared first on teamtalk.com.
planet football - 3 hours ago

Solskjaer is refusing to hit the transfer panic button, while Fabrizio Romano claims two players will arrive at United before the deadline The post Solskjaer has Man Utd belief as transfer guru claims double deal is close appeared first on teamtalk.com.
team talk - 3 hours ago

Liverpool's transfer guru appears to have pulled a rabbit out of a hat after strikng an incredible deal with Wolves for Jota The post Michael Edwards strikes gold at Liverpool as details emerge of incredible Diogo Jota deal appeared first on teamtalk.com.
team talk - 3 hours ago

Arsenal boss Mikel Arteta was this afternoon drawn on whether or not the summer addition of Willian is set to have an effect on Pierre-Emerick Aubameyang’s status as first-choice penalty taker at the club. Gunners return to action Arteta’s men, along with the majority of the Premier League’s clubs, of course got their 2020/21 campaign […]
101 great goals - 12 hours ago

Speculation stemming from the European media this evening suggests that Premier League giants Manchester United are eyeing up the signature of Porto star Alex Telles. Reds eyeing defensive additions Recent weeks have seen reports rampant that Ole Gunnar Solskjaer and co. are eyeing up reinforcements at left-back. Though the area did not prove of particular […]
101 great goals - 13 hours ago

Hoddle is convinced the return of the four-time Champions League winner gives Spurs a chance to end their long wait for silverware. The post Tottenham legend claims Bale deal will ‘make or break’ their season appeared first on teamtalk.com.
team talk - 14 hours ago

A pair of updates surrounding Tottenham’s business on the transfer market have been forthcoming online on Friday. Spurs making moves Ongoings at the Tottenham Hotspur stadium have of course taken centre stage in the media this week. This comes with the north Londoners primed to spring into action, to provide Jose Mourinho with the kind […]
101 great goals - 14 hours ago

The north London club are making a splash in the summer market, with a loan deal for the return of club legend Gareth Bale close. The post Mourinho tells Levy he wants centre-back with £80m exit clause as next Tottenham signing appeared first on teamtalk.com.
team talk - 15 hours ago

Ranking every midfielder Liverpool have signed since Alonso – PF

Where will we place Thiago on this list a year from now? Above Christian Poulsen, we reckon The post Ranking every midfielder Liverpool have signed since Alonso – PF appeared first on teamtalk.com.
planet football - 15 hours ago

Manchester United boss Ole Gunnar Solskjaer has provided a brief fitness update on his squad, ahead of the club’s upcoming meeting with Crystal Palace. United vs Palace Solkjaer’s men are set to get their Premier League campaign underway tomorrow evening. The English top-flight of course kicked off last weekend, with 16 of the competition’s 20 […]
101 great goals - 15 hours ago

Solskjaer left frustrated by Greenwood call up: “He should have been rested”

Chaotic start A call-up to the England squad is viewed as the pinnacle by many footballers who have earned the right to represent their country. Mason Greenwood’s introduction to the Three Lions’ senior squad has been nothing short of majorly controversial, though. Not only was the 18-year-old’s selection a surprise, but the events which occurred […]
101 great goals - 15 hours ago
LOAD MORE SPORT

Two European heavyweights are set to go toe-to-toe for the signature of Watford striker Danny Welbeck, according to a report.

Football Insider reports that Turkish clubs Beikta and Fenerbahce are interested in bringing the 29-year-old to the Super Lig, with both outfits reportedly willing to offer a season-long loan for the attacker.

Forty-two time international Welbeck was one of the many notable first team players to sit out the Hornets’ 1-0 win over Middlesbrough in their first game back in the Championship.

Indeed, he is yet to reach double figures in a single league campaign to date. Overall, he has scored 73 times in 331 club games across his 13-year senior career.

The former Manchester United striker has been hampered by injuries throughout his time as a professional footballer, being sidelined for more than 140 of his club’s games.

He was ruled out for a lengthy period last season too, having picked up a hamstring injury in November, just three months after signing for the club on a free from Arsenal. 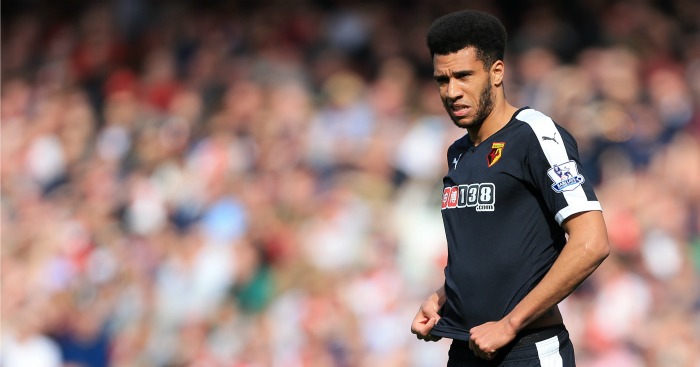 Several reports elsewhere, meanwhile, are claiming that three other current Watford players could be on the brink of leaving the club.

AS (via Sport Witness) claims that Valencia are lining up a move for midfielder Etienne Capoue.

The France international has played more than 170 times for Watford since his transfer from Tottenham in July 2015. However, he has not featured in his side’s last four league games.

Meanwhile, Sky Sports says that Burnley could be in for Craig Dawson should James Tarkowski leave Turf Moor this transfer window.

Tarkowski’s future in Lancashire remains uncertain, but Clarets head coach Sean Dyche has said he is confident the centre-back will stay.

Finally, forward Luis Suarez could also be walking through the exit door amid interested from Ligue 1 outfit Marseille, according to the Watford Observer.

The 22-year-old netted 19 goals in 38 games during his loan spell at Real Zaragoza last term but the Hornets are seemingly very reluctant to let him go.

Arsenal transfer round-up: Lyon identify Aouar replacement as new priority named Arsenal are in a much better shape than they were 12 months ago, even a few months ago. The Gunners finished last season strongly, winning the FA Cup, and started this season strongly with a victory in the Community Shield and over Fulham on the opening weekend of the new Premier League campaign.

Phil Mickelson 'disappointed' as Winged Foot deals him another US Open letdown Phil Mickelson could not undo the damage of his opening round as he missed the cut at Winged Foot, scene of past U.S. Open misery for him.

Gareth Southgate says coaching England squad has made him a better parent EXCLUSIVE: The Three Lions boss and wife Alison have two teenagers, daughter Mia, 19 and 15-year-old son Flynn. He says he often applies the coaching lessons he has learned to family life.