Manchester United starlet Mason Greenwood has made club history this evening, after being included in Ole Gunnar Solskjaer’s starting XI to face AS Roma.Giallorossi showdownThe Red Devils are of course set to return to action shortly.United have made the trip to the Italian capital, eyeing up a place in the Europa League final at the […]
101 great goals - 33 minutes ago

The striker has effectively told the Hammers, and other Premier League suitors, why he would not fancy a move to England The post Chelsea past emerges as West Ham learn bizarre reason why £36m striker bid is certain to fail appeared first on TEAMtalk.
team talk - 37 minutes ago

A remarkable scene played out on Spanish TV on Wednesday evening, as the hosts of the popular El Chiringuito de Jugones took aim at Eden Hazard.Werner & Mount on targetBelgian international Hazard was of course back in action a little less than 24 hours ago, as Real Madrid made the trip to Stamford Bridge for […]
101 great goals - 1 hour ago

Southampton boss Ralph Hasenhuttl has this afternoon provided an update on the fitness of star striker Danny Ings.Anfield showdownThe Saints are set to return to action on Saturday night, in a Premier League meeting with Liverpool.Hasenhuttl and co. will head into proceedings with little to play for, sitting a full 10 points clear of the […]
101 great goals - 2 hours ago

'He is really good on the ball, plays with both feet.'
metro - 3 hours ago

The Magpies star is fully aware of where his side were earlier in the season and wants no repeat next term The post Newcastle star sets bullish ‘minimum standard’ with fierce scrutiny of colleagues appeared first on TEAMtalk.
team talk - 4 hours ago

The Madrid winger cooked up a storm with his actions at Stamford Bridge and a report reveals the fallout that awaits him The post Hazard faces Madrid scolding after brewing up storm with Chelsea snigger appeared first on TEAMtalk.
team talk - 6 hours ago

The Brazilian will be hard to replace.
metro - 6 hours ago

All English finalWith Chelsea progressing past Real Madrid and Manchester City knocking out PSG, there will be an all-English Champions League final.Thomas Tuchel was able to mastermind 3-1 aggregate victory over Zinedine Zidane and Los Blancos.Goals from Christian Pulisic, Timo Werner and Mason Mount were enough over 180+ minutes to wrap up the tie comfortably.Equally […]
101 great goals - 6 hours ago

Arsenal have found an ideal reinforcement for next season - but they will have to up their offer if they are to sign him The post Difference of €16m separates Arsenal after bid for star to cover two roles appeared first on TEAMtalk.
team talk - 6 hours ago

The attacker has scored twice in just six appearances for a Southampton side that has struggled in the second half of the campaign. The post Crunch Klopp talks planned as Olympic dream could end star’s Liverpool career appeared first on TEAMtalk.
team talk - 6 hours ago
LOAD MORE SPORT

Tottenham boss Jose Mourinho says he feels he needs to field 15 players to avoid criticism about leaving one of his star men out of the team.

After Spurs‘ 3-1 win at St James’ Park, a reporter asked Mourinho what Bergwijn has to do to earn a start. The attacker was a regular feature before the lockdown but has started three of seven games since.

In response, Mourinho referenced a host of other players and managers in his efforts to set the record straight.

“Look, that is a question you normally do to me but you do not do to Frank Lampard, to Jurgen Klopp, to Pep [Guardiola], to all the coaches of the big clubs with big players,” the Portuguese said (via Sky Sports News).

“Frank Lampard plays [Christian] Pulisic, you don’t ask him why he doesn’t start [Callum] Hudson-Odoi or something. When Pep Guardiola plays someone and Bernardo Silva is on the bench, you never ask about Bernardo Silva. 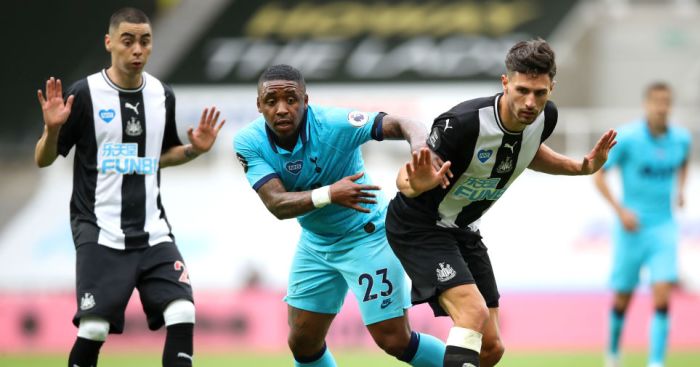 Mourinho added that Bergwijn’s role in the team has not diminished due to his recent spate of substitute outings.

“How many times has Nuno [Espirito Santo] left [Adama] Traore on the bench to win matches in the last 30 minutes. You don’t ask Nuno why Traore is on the bench and why he’s playing [Diogo] Jota or [Daniel] Podence or [Leander] Dendoncker. It’s just me.

“So he doesn’t have to do anything else, he’s a team player. He plays for Tottenham and if Tottenham wants to try and compete against the best teams, Tottenham cannot have 11 good players.

“They need more and we’ll have them on the bench.”

Kane scored two second-half goals for Spurs against Newcastle to take his tally since the lockdown to four.