The most recent deaths were that of nine female and 12 males, according to the health authorities.
metro - 26 minutes ago

Coronavirus lockdown is bringing back the live DJ battle

The biggest names in music are holding hours-long DJ battles on Instagram Live—and helping us connect.
quartz - 26 minutes ago

Gen Z consumers are making companies bend to their will

With social media upending traditional relationships with consumers, companies appealing to Gen Z have to follow their lead.
quartz - 39 minutes ago

How Gen Z will be shaped by the coronavirus pandemic

Baby Boomers had the Vietnam War. Millennials had 9/11 and the financial crisis. For Gen Z, their life-altering world event is the coronavirus crisis.
quartz - 41 minutes ago

As a member of Gen Z, teenage chef and social media star Eitan Bernath is perfectly suited to the world of TikTok.
quartz - 44 minutes ago

Young adults around the world offer a glimpse into their most sacred place: their room

Quartz asked young adults living in Iraq, Australia, Argentina, the Netherlands, the UK, and the US about the place they value the most.
quartz - 47 minutes ago

In the United States - President Trump has predicted a surging number of deaths - as his surgeon general warned this would be "the hardest and the saddest week of most Americans' lives", calling it a 'Pearl Harbour moment'.
channel 4 - 51 minutes ago

Following social distancing rules is "mission critical", the Health secretary Matt Hancock has said - warning those flouting the rules were risking their own lives, and the lives of others.
channel 4 - 56 minutes ago

The new Labour leader, Sir Keir Starmer has pledged to work with Boris Johnson "in the national interest" through the coronavirus crisis, saying he would support the Government if they decided to ban outdoor exercise.
channel 4 - 56 minutes ago

The whistleblower warned that staff who could not afford to stay at home might come in and spread the virus to members of the public.
metro - 4 hours ago

Deaths and new infections decreased slightly for the first time since the crisis began. That doesn't mean you should outside.
vice - 4 hours ago

Of course, they're likely to be well over 60 years old.
quartz - 4 hours ago

Perhaps the most under-reported statistic in the entire coronavirus pandemic passed an important milestone on Sunday as 250,000 were marked as having recovered from the illness.
rt - 5 hours ago

The 58-year-old has been charged with three assaults on emergency service workers.
metro - 7 hours ago

A study found the drug Ivermectin - which is usually used to treat head lice - stops coronavirus growing in cell culture.
metro - 8 hours ago

With its scheduled launch date now looming large, NASA’s Perseverance Mars rover has been kitted out with slick new wheels and brakes to help it cope with the Red Planet’s rough terrain.
rt - 8 hours ago

It is comes towards the end of the Lenten period.
metro - 8 hours ago
LOAD MORE NEWS 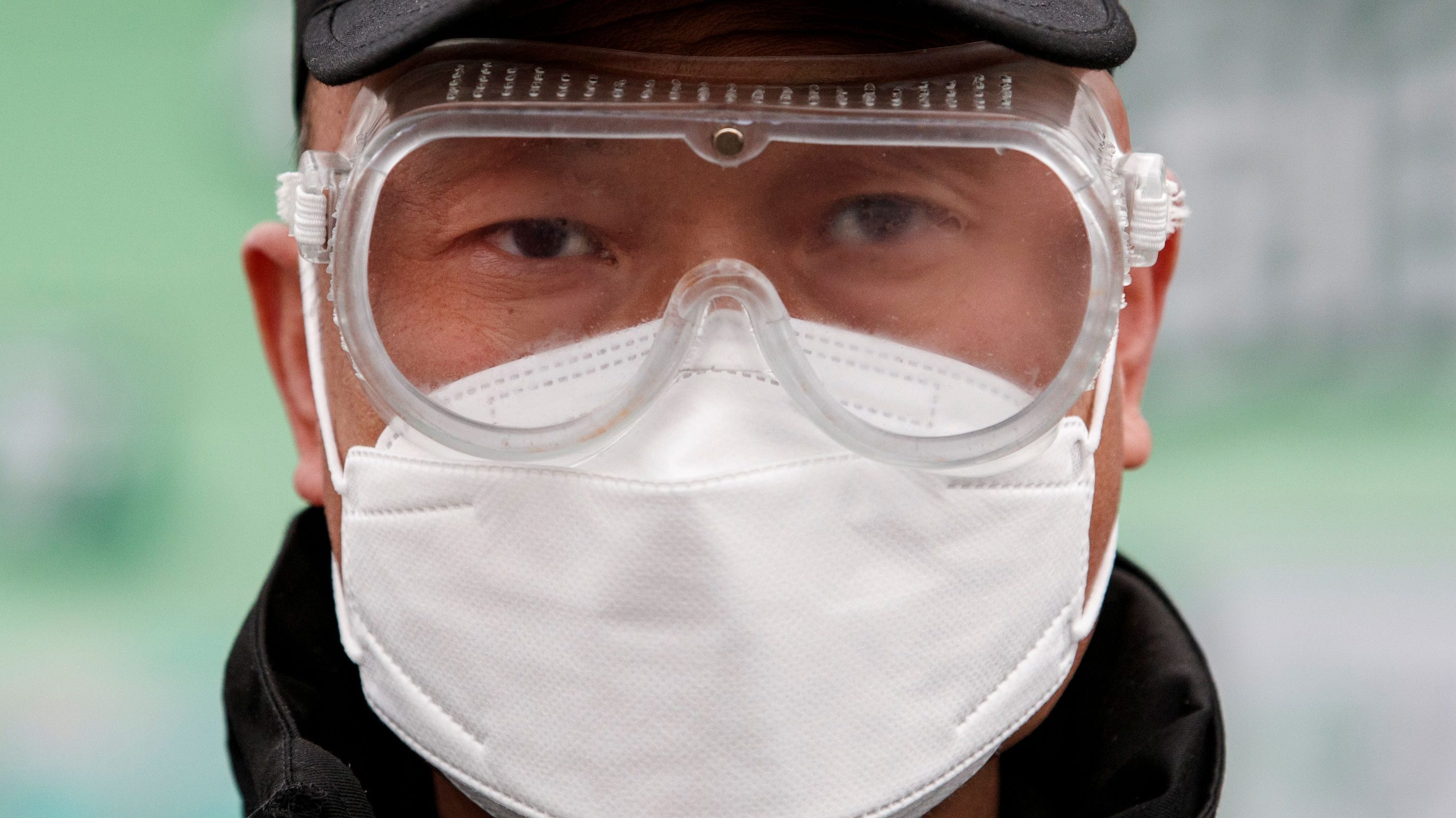 The city of Beijing recently released detailed guidelines for workplaces to avoid the spread of the novel coronavirus, or Covid-19, within offices and other places of business.

Broadly speaking, the city wants companies to cut in half the number of people present in a workplace at any one time, whether by allowing employees to work from home or by coordinating staggered shifts. Some of the other rules, which were posted to an official Beijing WeChat channel (link in Chinese) this week, are even more precise.

The government has suggested that elevators never be more than 50% full, for example, and that co-workers not eat facing each other, presumably because of the risk from any airborne spittle of an infected person. (Some people who have acquired the potentially deadly flu-like virus do not show any symptoms or exhibit only mild symptoms, like fever or coughing.) Beijing’s companies also are expected to appoint one employee each to enforce the new rules.

Other guidelines would have employers:

(The Beijinger, a local English-language site, published this translation of all 10 of the city’s guidelines.)

As of Feb. 27, 2020, Covid-19 has infected more than 78,000 people in China, according to the World Health Organization (WHO). The virus is now spreading in other countries, including South Korea, Iran, and Italy. The total number of confirmed cases worldwide is over 82,000.

Within China, Hubei province has been most affected by the epidemic; currently, in that area, more than 65,000 cases of coronavirus, and more than 2,600 related deaths, have been reported, compared to the reported 410 cases and five deaths in Beijing.

Asked to comment on Beijing’s new workplace rules, Robert Amler, dean of New York Medical College’s School of Health Sciences and a professor of public health, says that some of the advice is more specific than he’d expect, but that doesn’t mean he questions its validity.

When a disease is spreading in multiple countries at once, guidelines will naturally be different from place to place, he says, and will speak to the lifestyle, and to the trajectory of the virus, in each location. In China, he notes, “there’s a tremendous amount of congestion and crowding. They really do live under very different conditions than we do” in the US.

So if you work in a less-dense environment or in a country less impacted by the virus, should you change the way you behave around the office?

“If you’re going to be touching surfaces in public places, wash your hands frequently,” Amler says, echoing guidance from the US Centers for Disease Control for everyday prevention of illness during flu and respiratory season. Hand-washing is still the best defense because it curbs the risk that you will touch a surface that’s contaminated and then touch your face and infect yourself, Ambler explains.

“Try to remember not to touch your face a lot, which is hard,” he says, adding that people are generally unaware of how often they do it. “And if there’s no soap or water available, use a hand sanitizer with at least 60% alcohol,” he suggests. Wearing gloves in public places also can be helpful.

Note that the virus doesn’t survive on surfaces for hours and hours, Ambler also told Quartz. If you’re in the office touching elevator buttons or door handles, or holding handrails on escalators, “you don’t have to worry about someone who was there yesterday and touched something,” he says.

It’s also best to avoid people who are coughing or sneezing, or keep at least keep a minimum distance of six feet from anyone who is expectorating, the doctor advises. “That’s far enough that most droplets will fall with gravity and not hit you in the face,” he explains, but if you can keep a further distance, so much the better. Meanwhile, if you’re coughing or sneezing yourself, stay home and seek medical attention. “Stay away from everyone else,” he says.

For now, he points out, the flu remains a much bigger problem in the US. If your objective is to minimize the risk of a respiratory illness, get a flu shot if you haven’t already (it’s not too late). And, says Ambler, if do get sick, you can ask your doctor to prescribe an antiviral medication.

New York coronavirus cases 'dropping for first time' New infections and deaths are down in New York, but officials say the danger for Americans is still high.

EU humiliated: Donald Trump's huge economic hit to bloc exposed - 'European jobs at risk!' THE EUROPEAN UNION has had a number of run-ins with Donald Trump since he was elected - and the US President threatened the bloc's trading ambitions with a menacing threat.

Africa bracing for ‘complete collapse of economies’ as coronavirus takes its toll African leaders are warning of an economic collapse if financial assistance isn’t provided to the millions of people out of work because of the novel coronavirus.