US pauses aid to Sudan, threatens military coup leaders with ‘all measures’ if government not restored

The US State Department has frozen $700 million in aid to Sudan, after the country’s military staged a coup and arrested the civilian government. A spokesman said the US is willing to use “all measures” to resolve the crisis.
rt - 3 hours ago

Erdogan backtracks on threats to expel US envoy and 9 other ambassadors, after they pledge to not interfere in Turkey’s affairs

Ankara has backtracked on its threats to declare 10 envoys “personae non gratae” after they called for the release of an opposition figure even though their embassies had officially vowed not to interfere in the country’s affairs.
rt - 4 hours ago

Met Police to apologise to mother of murdered sisters

Channel 4 News understands that the Independent Office for Police Conduct has found no evidence of discrimination into the missing persons inquiry for the two murdered sisters Bibaa Henry and Nicole Smallman.
channel 4 - 4 hours ago

Antarctica marine biologist: ‘It’s not the earth that needs saving, it’s us as humans’

Sixty percent of the world's freshwater is held in Antarctica in an ice sheet that stretches across almost the entire continent.
channel 4 - 5 hours ago

Australia is the custodian of one nature’s most precious and sensitive habitats: the Great Barrier Reef. But recurring bleaching as sea temperatures climb higher means this ecosystem risks being lost forever. Some have questioned Australia’s commitment to climate targets, but the country’s Prime Minister Scott Morrison is now attending the Glasgow summit with a plan…
channel 4 - 5 hours ago

For the low-lying islands of the world this crisis is truly existential, literally lapping at their feet.
channel 4 - 5 hours ago

The continent of Africa is on the frontline of the climate emergency, but all too often it has the quietest voice at the table when pressing for global changes.
channel 4 - 5 hours ago

Kerala floods: Clear up continues after flash floods and landslides in southern India

In the southern India state of Kerala, a clear up is underway after flash floods and landslides led to the deaths of more than 20 people and devastated homes and farming land.
channel 4 - 5 hours ago

Pulling in greenhouse gases from the atmosphere will be crucial in the fight against climate change.
channel 4 - 5 hours ago

As hosts of COP, the UK's role is to lead by example.
channel 4 - 5 hours ago

COP26: Will China and the US put aside rivalries to tackle climate change?

The COP summit is the world's best and, many say, last chance to get runaway climate change under control.
channel 4 - 5 hours ago

As we approach COP26, the news gets bleaker; greenhouse gas emissions hit a record high last year according to a UN report.
channel 4 - 5 hours ago

The darkness is disturbing the family's little boy with autism and depressing his mum, who has seasonal affective disorder (SAD).
metro - 6 hours ago

The ex-private schoolboy was found starved and chained to a radiator after he phoned his distant dad saying he needed £6,000.
metro - 7 hours ago

International parties have voiced their concern and condemnation after the Sudanese military staged a coup, arresting the prime minister as well as other senior civilian leaders and dissolving the government.
rt - 7 hours ago

The US Special Representative for Iran, Robert Malley, has shared America's "growing concern" about Iran's alleged nuclear advancement, as he declared that talks over reviving the 2015 Iran Nuclear Deal are in a critical phase.
rt - 7 hours ago

A Pair of Jan. 6 Planners Just Rolled on Their Congressional Accomplices

Richard Spencer and the 'Crying Nazi' are among the defendants in court this week in a federal lawsuit that hopes to financially devastate several white supremacist movements.
vice - 8 hours ago

Moderna Inc has claimed that its mRNA Covid vaccine is “well tolerated” in children between the ages of six to 11, and announced that the firm plans to submit the data from its study to regulatory bodies worldwide shortly.
rt - 9 hours ago

The fast food chain's employees will strike in cities like Chicago, Houston, and Miami to spotlight accusations of sexual harassment and assault.
vice - 9 hours ago
LOAD MORE NEWS

Want the best of VICE News straight to your inbox? Sign up here.

A Cyber Ninja, a trio of GOP lawmakers, and some conspiracy theorists walk into a bar.

This is not the start of a bad joke, but an actual event that took place Wednesday night, to celebrate the bogus Arizona audit—despite the small matter of the audit still not being finished.

The event was described by Arizona State Sen. Wendy Rogers, an attendee and one of the biggest supporters of the recount, as a “volunteer reunion.”

“For those saying the audit is ‘fake’ and ‘not real’ and ‘nothing is going to happen’—take a look at these audit volunteers. Patriots, everyone of them—real people who did the Lord's work,” Rogers tweeted alongside pictures from Wednesday night’s event in downtown Phoenix. 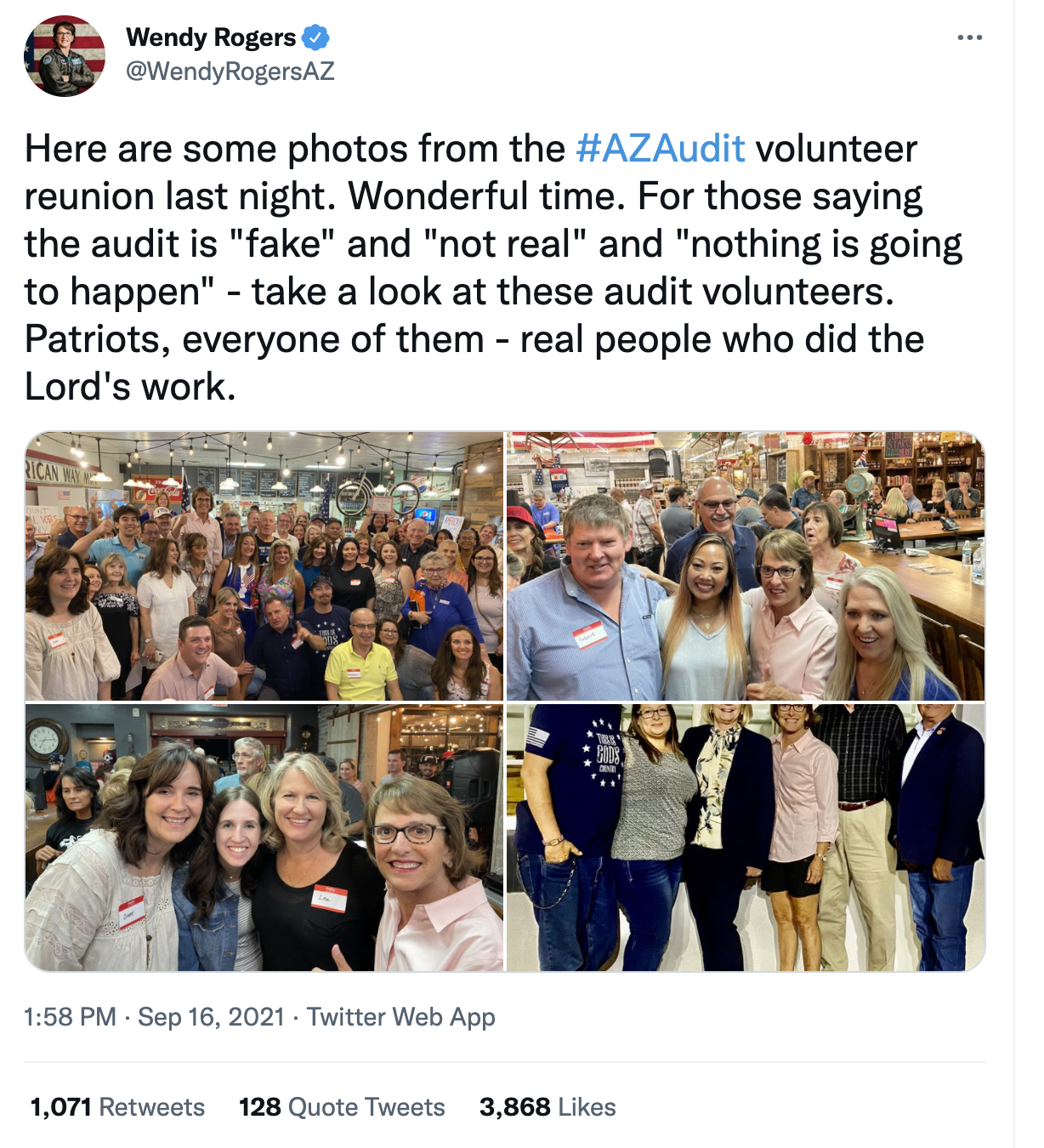 It is unclear why Rogers thinks that pictures of people in a restaurant are meant to assuage fears that the audit report, when it finally (maybe) arrives next week, will further exacerbate the baseless belief that the 2020 presidential election was stolen.

But this was not just a gathering of volunteers. The event to celebrate the success of the unfinished and non-partisan recount was also attended by several sitting lawmakers.

As well as Rogers herself, Sen. Sonny Borelli was also in attendance. Borelli, like Rogers, has become something of a minor celebrity in QAnon and MAGA circles since the audit launched, thanks to his full-throated support for various conspiracy theories about the election. He and Rogers have both become familiar faces on the MAGA speaker circuit. Borelli is even scheduled to appear at the big QAnon conference taking place in Las Vegas next month.

Senate President Karen Fann, also a Republican, showed up in the photos as well. It was Fann who authorized the supposedly non-partisan audit that was initially slated to take just 14 days, but which will hit the five-month mark on Friday, Sept. 24, when Cyber Ninjas say they will finally present the report to the Arizona Senate.

“It was not a reunion nor a ‘celebration party,’ Fann told VICE News. “This was a private thank you dinner put on by the folks  who organized all of the observers who worked on the audit.” She said she was present because she had been asked “to come and say a few words of thanks” to the volunteers.

Doug Logan, the CEO of Cyber Ninjas, also stopped by, having recovered from a nasty bout of COVID-19 that further delayed the preparation of the report. Logan, whose company has zero experience of running an election audit, spouted stolen election conspiracies on social media prior to being appointed. Even while running the audit, he found time to appear in The Deep Rig, a film about election fraud produced by Overstock.com founder and uber-conspiracy theorist Patrick Byrne.

It may have surprised some to see Logan at the event given he had said earlier in the day that he needed more time to comply with court orders to produce communications between his company and the Senate about the audit.

Logan and Cyber Ninjas did not respond to VICE News’ request for comment.

Celebrating with Logan was Steve Robinson and his fiance Shelby Busch.  pair were among the very first to begin calling for an audit in Maricopa County based on spurious conspiracy theories first spread by QAnon influencer Ron Watkins about Dominion’s voting machines. They held rallies as far back as December 2020 and formed a political action committee (PAC) called We The People AZ to push their agenda. As well as small donations from “patriots” across the country, they were given $50,000 in funding from MyPillow CEO Mike Lindell.

Rounding out the roster of pro-Trump figures at the event was Jordan Conradson, who writes for the far-right conspiracy blog the Gateway Pundit. Conradson ran the aggressively trollish Audit War Room account on Twitter, which spread lies and conspiracies about the 2020 election.

Rogers dismissed journalists’ criticism of the event, claiming that “#FakeNews folks don't want people to eat a meal or talk to people.”

She then doubled down by linking all journalists to right-wing bogeyman George Soros and referencing Operation Mockingbird, an alleged covert operation run by the CIA during the Cold War to manipulate the media. The theory has more recently been revived by QAnon conspiracists. 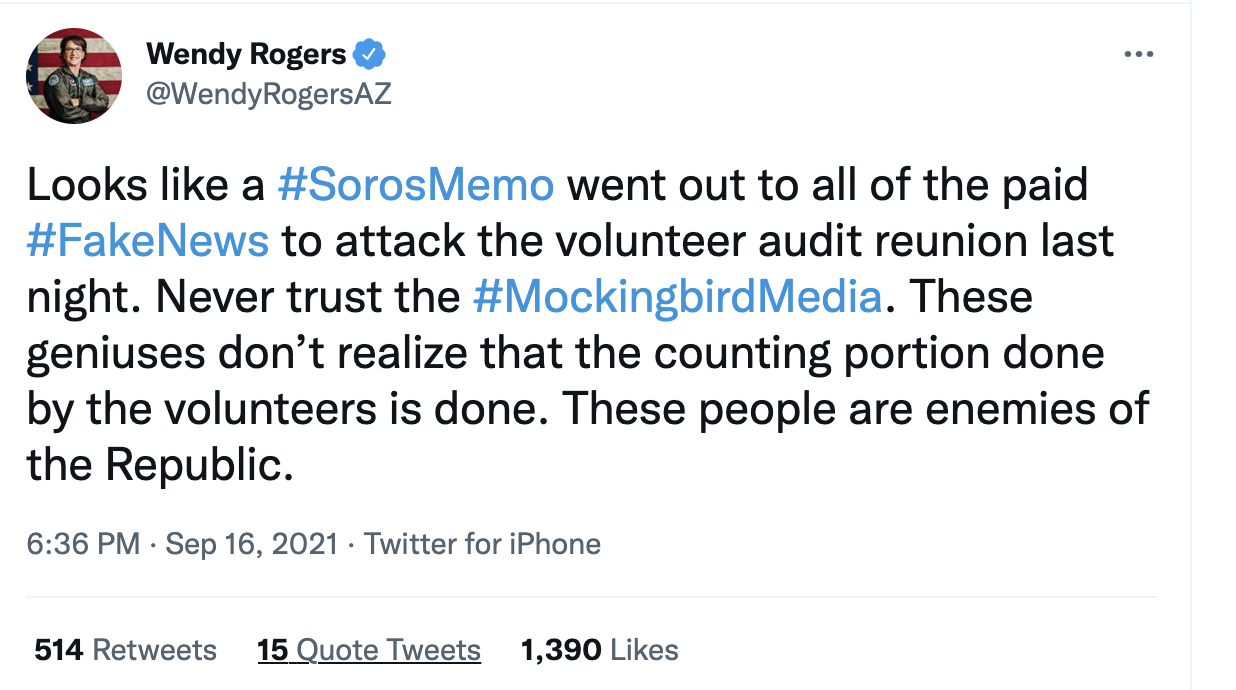 How a supply chain shortage hurts local businesses A bottleneck could cost Daniel Liberson, an artisanal vinegar maker in Virginia, his small business.

Putin declares war on pirates: Russian navy sends hijackers packing in rapid counter-swipe RUSSIAN NAVY has driven pirates away from a civilian ship off Africa's coastline after a Panama-flagged vessel was hijacked, according to recent reports.

Can Lego help save Singapore's coral reefs? Scientists in Singapore are using the popular building block in an effort to rejuvenate its reefs.

UK's 'smallest detached house' measuring just 4 metres wide on sale for £235,000 The house is pricey, but the amazing property is full of character, is set in the grounds of a stately home and has everything you need - provided you don't need too much clutter

Sex crime allegations about police and staff shoot up by 600% in five years Between April 2018 and March 2021, 66 police staff faced disciplinary proceedings after being investigated over sex claims and misconduct was proven in 63, according to IOPC data

North Tyneside protest to take place over Amazon's alleged Covid-19 'profiteering' Campaigners are set to protest today about how the multi-billion pound company treated its staff during the pandemic, as well as exposing 'price gouging'

EastEnders' Stacey confirms she's married in return twist - as fans 'rumble' who to EastEnders' Stacey (Lacey Turner) dropped a bombshell as she returned to Albert Square during Monday night's episode, as she confessed to Martin she was married. Whilst she hasn't revealed who yet, fans think they've worked it out