Throughout this crisis, we've been talking to frontline workers in the NHS about their concerns, hopes and worries as they tackle the Covid-19 outbreak.
channel 4 - 17 minutes ago

Dr Anthony Costello, Professor of Global Health at University College London and a former director at the World Health Organization, said he thought the lockdown would work but said the UK was behind the curve.
channel 4 - 18 minutes ago

The blazing Easter sun while we are confined indoors is one of the minor cruelties of this crisis.
channel 4 - 19 minutes ago

Religious leaders adapt to coronavirus social distancing – but some refuse

The Archbishop of Canterbury will deliver his Easter sermon by video from his flat, as mainstream churches ask the faithful to log-on or tune in to hear the word.
channel 4 - 19 minutes ago

Bodies left in streets of Guayaquil as Ecuador struggles with coronavirus

In the UK, we are understandably obsessed with quantifying this unfathomable crisis: counting the ventilators, the tests, the infected and of course the dead.
channel 4 - 23 minutes ago

The US will slash oil output by another 250,000 barrels a day to make up the difference for Mexico and help OPEC+ boost the price, in exchange for being compensated later, President Donald Trump has announced.
rt - 28 minutes ago

Police in Scotland have imposed more than 500 fines on those flouting lockdown rules.
channel 4 - 36 minutes ago

Just a few weeks ago President Trump still promised that America would reopen for business by Easter.
channel 4 - 36 minutes ago

The Netherlands suffered 2,000 more deaths than usual during the first week of April, the country’s statistics office has said. The spike suggests the Covid-19 toll might be significantly higher than officially registered.
rt - 40 minutes ago

Family transforms home into factory to make visors for NHS

The lack of personal protective equipment for frontline medical staff continues to be a heartbreaking and critical issue.
channel 4 - 47 minutes ago

The history of the violation of the lives of Africans for the scientific benefit of white Westerners is long and horrifying.
quartz - 1 hour ago

The number of deaths from the novel coronavirus has reached 100,000 globally, according to figures compiled by the AFP news agency, while the number of confirmed cases is rising toward the two million mark.
rt - 1 hour ago

“Testing on a scale that we have not done before.”
vice - 2 hours ago

Emma Clarke, 35, was said to be 'very popular with her pupils' in Ormiston Bolingbroke Academy in Runcorn.
metro - 2 hours ago

A hospital in China has apologised after its morgue mixed up two bodies belonging to different families.
metro - 2 hours ago

Coronavirus fraudsters have already made £2,000,000 out of crisis

Action Fraud said it had received reports of various scams related to the pandemic across England, Wales and Northern Ireland.
metro - 2 hours ago

Sick and dying need you to stay home over Easter, Matt Hancock says

Don't be tempted to go to the park or beach this weekend.
metro - 3 hours ago

Prices skyrocketed for a correctional facility dealing with a Covid-19 outbreak.
quartz - 3 hours ago

Coronavirus Is Crashing America's Joke of an Unemployment System

In the last week of March, Florida answered just 1 percent of the phone calls it received from newly-unemployed people desperate to file claims.
vice - 4 hours ago
LOAD MORE NEWS 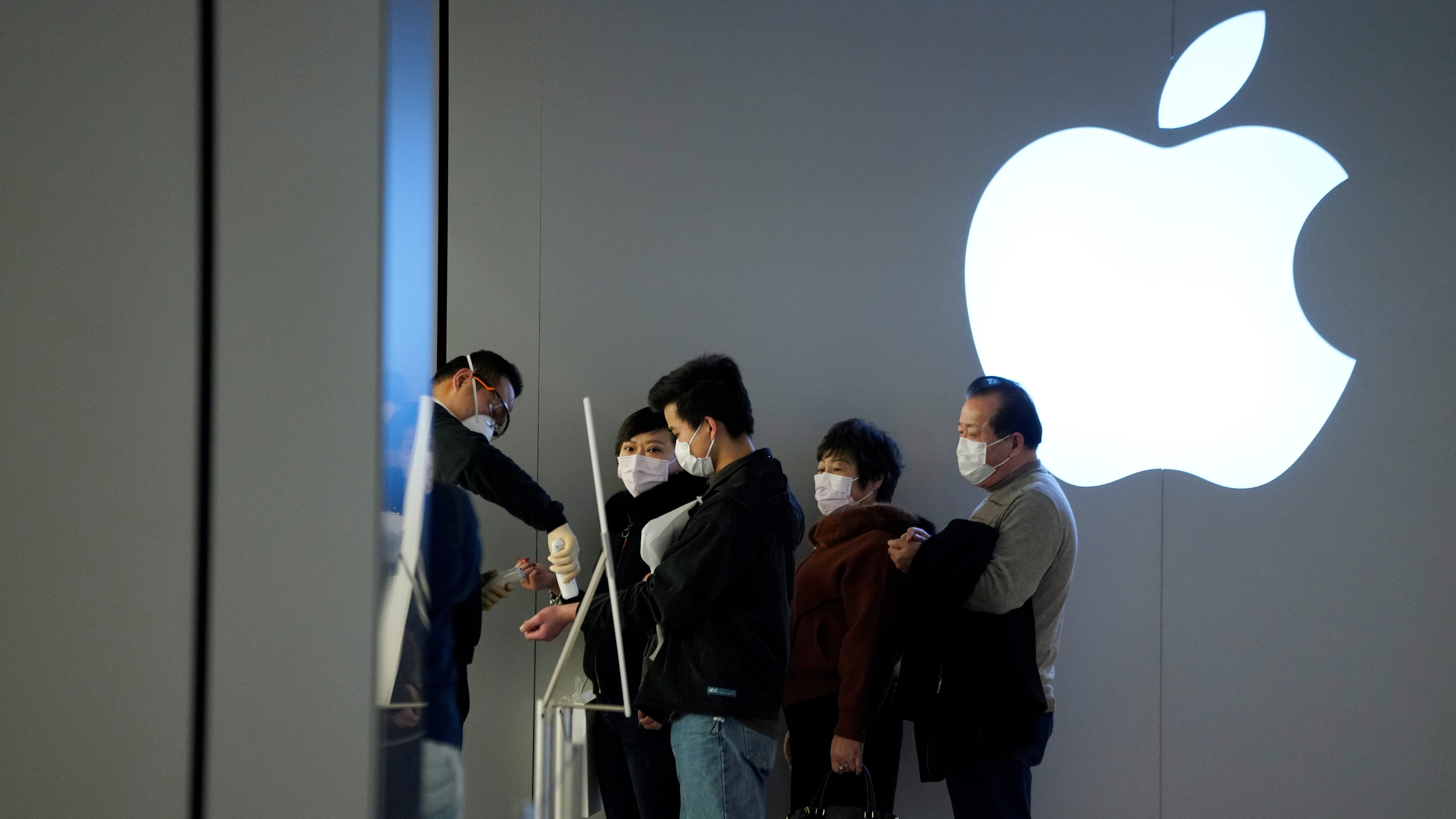 Coronavirus may be another reason why you dont upgrade your smartphone this year.

Industry forecasts anticipate that global smartphone production will be hit hard as a result of the outbreak of COVID-19 that began in December. China, the smartphone manufacturing hub of the world, is now choked off from suppliers, workers, and logistics networks. Analysis firm TrendForce predicted this week that production of smartphones will have decreased by 12% in the first three months of 2020, compared to the same period last year.

Apple announced earlier this week that it doesnt expect to meet its second-quarter financial guidance due to stalled production in China as a result of the outbreak. Most of Apples retail stores in China remain closed after shutting down last month.

Samsung, which moved much of its production to Vietnam in recent years, is also likely to face production delays. Vietnams Ministry of Industry of Trade told Reuters that supply chain problems as a result of the coronavirus will likely delay production of Samsungs latest models. Vietnam relies much on China for materials and equipment, which makes the country become vulnerable when such outbreak happens, it said. Samsung’s S20 Galaxy lineup, announced this month, will begin shipping in March; Samsung has not confirmed if the outbreak will delay when those phones hit stores.

Delays in production arent the only threat to the smartphone industry. China is also the worlds largest smartphone market. Domestic smartphone manufacturers like Huawei, Xiaomi, Oppo, and Vivo will be hit with a double-whammy: less demand for their products and delayed production as consumers and workers stay home.

A drop in demand in China will be a major factor in a decline in smartphone sales, according to Anna Ahrens, an analyst with IHS Markit. “There needs to be time for people to get back to normal life, and demand will not recover fast.”

But the smartphone industry’s struggles predate the coronavirus outbreak. Global smartphone sales have already been on the decline, partly because people are holding on to their handsets for longer. Advances in technology have extended battery life and upgraded camera tech to the point that many users dont see the point of giving up perfectly good devices that are two or even three upgrade cycles out-of-date.

Most smartphone manufacturers saw fewer shipments in 2019 than 2018, according to analysis from IHS Markit.

In this environment, one might expect the price of smartphones to increase. But it’s unlikely consumers will see higher-priced phones this year as a result of the coronavirus. Far more likely are temporary shortages, delays in fulfilling orders, or stores not having certain models in stock.

“In the short run, I don’t think prices will rise, because most brands don’t want to be seen as taking advantage or profit from a bad situation,” said Frank Gillett, an analyst with Forrester, in an interview with Quartz.

And even in the long run, price increases may be unlikely. Why? Because most smartphone users may decide to just wait out the storm, and companies will lose out on new sales. “Most people can keep using the phones they have and delay an upgrade,” said Gillett.

US budget deficit totals $743.6 billion over past 6 months The federal government's budget deficit for the first half of this budget year totaled $743.6 billion, up 7.6% from last year, and well on its way to topping $1 trillion even before the impacts of the coronavirus were felt.

Former NUFC manager Sir Kenny Dalglish tests positive for coronavirus The 69-year-old ex-Celtic, Liverpool and Scotland player was admitted to hospital on Wednesday where he was tested positive for the Covid-19 disease

‘Danger of politicising a virus is you give it an opportunity to exploit us even further’ – WHO’s Dr Margaret Harris Dr Margaret Harris from the World Health Organization explained how hard it can be to keep track of case numbers in a country like Ecuador.

Coronavirus: Covid-19 outbreak 'levelling off in US' Though the US has not seen the peak of the outbreak yet, the trajectory is changing, experts say.

Lady Dunsany dies from coronavirus Brazilian-born architect ‘built magnificent buildings . . . and touched all who knew her’

MSNBC host scoffs at Trump forming economic task force: 'This isn't a snow day' MSNBC anchor Stephanie Ruhle suggested on Thursday that it was ridiculous for President Trump to form a second coronavirus task force dedicated to reopening the economy.

'Do it for your abuela, your big momma': Surgeon general urges communities of colour to stay home moments after admitting many of their jobs don't enable them to The White House coronavirus task force has urged communities of colour to stay home and practice social distancing measures, as data shows the death tolls are higher among Hispanics and blacks in parts of the US.