The number of confirmed Covid-19 coronavirus cases has soared to at least 76 in Italy, forcing authorities to introduce increasingly strict containment and quarantine measures in the northern regions of Lombardy and Veneto.
rt - 32 minutes ago

It's clearing the land for a new Gigafactory.
quartz - 2 hours ago

For starters, board members are paid too much.
quartz - 4 hours ago

World health officials are growing alarmed by the new cases in South Korea, Italy and Iran.
channel 4 - 6 hours ago

We spoke this afternoon to Zhou Jiaxin in Wuhan, a correspondent for the China Global Television Network, which is owned by the national broadcaster. I began by asking him what the WHO had learned on their visit to the city.
channel 4 - 6 hours ago

The Government has pledged to spend another £4 billion over the next five years on flood defence schemes.
channel 4 - 6 hours ago

Residents of a small Russian town in the northern Republic of Karelia marveled at a bright blue sphere lighting up the town with an otherworldly blue light as a meteorite fell in the area.
rt - 7 hours ago

Amazon and its third-party vendors rely heavily on China's factories.
quartz - 7 hours ago

Motorist churches are particularly attractive for their anonymity.
quartz - 10 hours ago

A Turkish soldier has been killed in the Syrian northwestern Idlib province in an airstrike by the Syrian Army, Turkish local authorities have said amid the ongoing crisis between Ankara and Damascus in the region.
rt - 10 hours ago

Mike Bloomberg entered the race late but has already spent more on his campaign than the top four other Democratic contenders combined.
quartz - 14 hours ago

‘Send somebody in the morning, by evening he returns as trained terrorist’ – Indian police chief on Kartarpur Corridor

Extremist groups are trying to “woo” and radicalize those arriving to Pakistan through the long-awaited visa-free Kartarpur Corridor launched several months ago, India’s police chief warned.
rt - 17 hours ago

Trump to confront Modi on ‘religious freedoms’, Kashmir, tariffs & other US ‘concerns’ during India visit

On his first visit to India next week, US President Donald Trump is expected to wade into several domestic controversies, challenging his Indian counterpart on the state of religious freedom in the country, as well as Kashmir.
rt - 19 hours ago

The EU is laying the groundwork for a massive international facial recognition database that may someday hook into the one maintained by the US, according to leaked internal documents.
rt - 23 hours ago

Public spaces across 10 Italian cities have been placed on lockdown, as the first Italian patient succumbed to the illness, amid a spate of new coronavirus cases – bringing the total in the country to 17 infections.
rt - 1 day ago

The presidential candidate called the non-disclosure agreements “consensual” at a debate earlier this week.
vice - 1 day ago

He's really not keen on new reports from U.S. intel agencies that Russia is working hard to get him reelected.
vice - 1 day ago

Global smartphone shipments will be slashed as a result of the outbreak.
quartz - 1 day ago
LOAD MORE NEWS 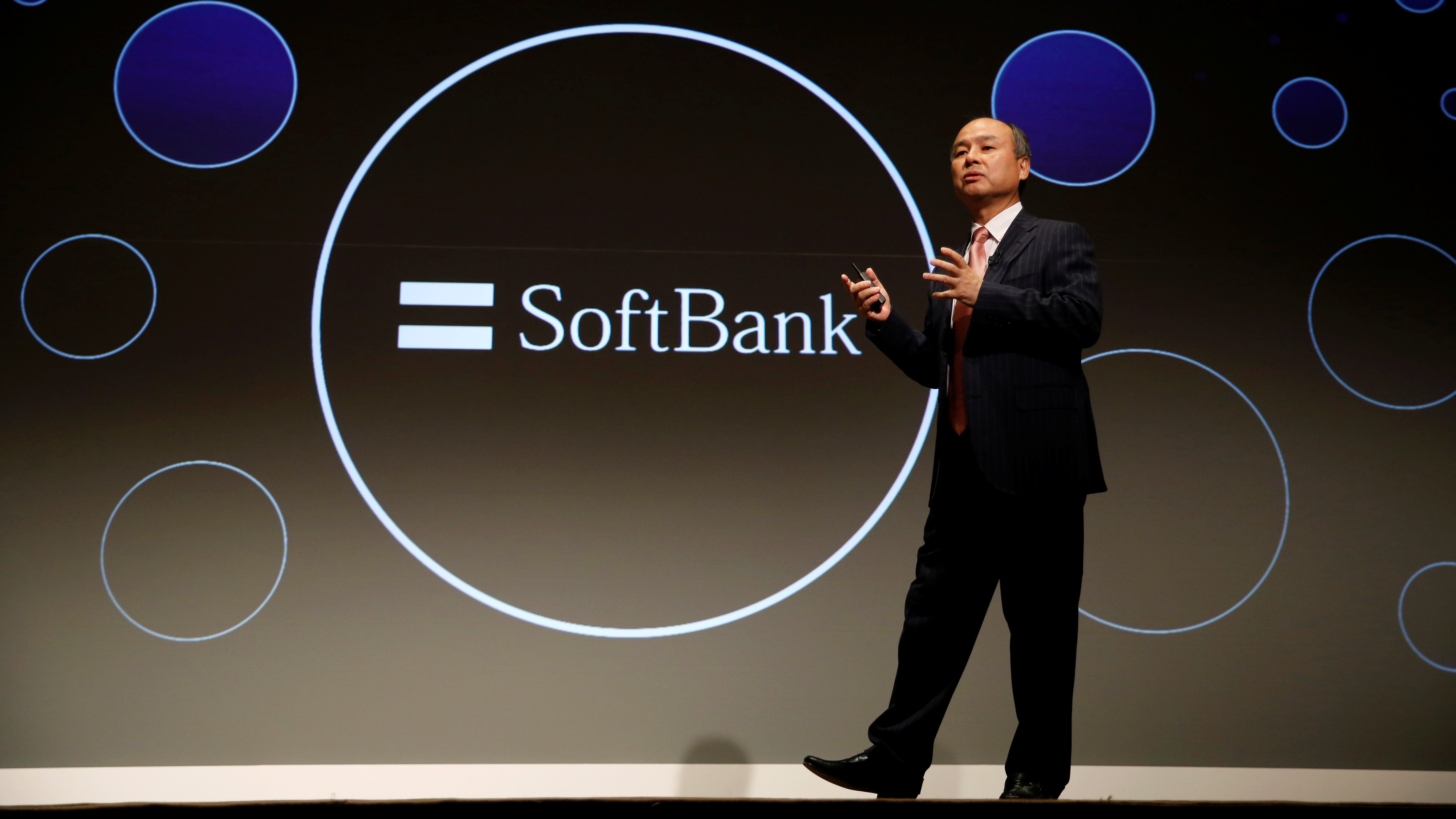 SoftBank’s mega-investments made a splash in markets around the world last year, including in the UK’s burgeoning fintech sector: The Japanese company’s $100 billion Vision Fund led two deals that accounted for a quarter of the capital raised by the country’s financial startups.

SoftBank’s outsize transactions in tech companies have raised questions about valuations and whether some firms in its portfolio have too much money. The Vision Fund invested $800 million in Greensill and $440 million in OakNorth, two London-based business lenders, according to industry group Innovate Finance. Those investments made up 25% of the $4.9 billion raised by financial startups (Quartz member exclusive) in Britain last year.

SoftBank and its Vision Fund have faced a wave of media and investor scrutiny lately. SoftBank founder Masayoshi Son is credited with a savvy bet in 2000 on Alibaba, which went on to become an e-commerce giant in China that’s now worth more than $600 billion. More recently, however, he and his colleagues have sunk billions of dollars into cash-burning startups, and it was reported late last year that the fund pushed portfolio companies to expand aggressively in spite of staggering losses.

There’s still a “positive halo effect” for a company associated with SoftBank, OakNorth CFO Cristina Alba Ochoa says. Vision Fund executives and its portfolio are rich with valuable connections to executives and business opportunities around the world. “In the last year they made introductions to banks and financial institutions outside the UK that we wanted to meet,” Ochoa said at an industry event hosted by Innovate Finance. “They really introduced us at the right level.”

SoftBank was contacted for this story but didn’t provide comment.

Greensill and OakNorth, unlike a number of unicorns that have emerged in recent years, say they are profitable. And profitability is becoming fashionable again after some privately funded companies, including some backed by SoftBank, got a shock from public markets. WeWork, one of SoftBank’s biggest investments, called off its IPO last year after Wall Street took a look at its financials. Last week Casper, a direct-to-consumer mattress company that didn’t receive any Vision Fund money, listed on the New York Stock Exchange at a valuation that was around half of what venture capital investors had assigned it.

The gap in valuations highlights a weakness in private markets. They “are a very inefficient pricing mechanism, Mark Tluszcz, the CEO at Mangrove Capital Partners, told Quartz in October. One person defines the price. Not a lot of scrutiny.

Greensill got $800 million in May from SoftBank, and that single deal, comprised of one investor, determined the working-capital lender’s $3.5 billion valuation, according to PitchBook data. By contrast, Citigroup’s stock traded more than 250 million times on NYSE in December. (Greensill also raised $655 million of convertible debt financing from SoftBank in October.)

Another question is whether enterprises backed by the Vision Fund have more money than they know what to do with. SoftBank’s companies can be fortified with hundreds of millions of dollars in capital, which is meant to help them surge ahead of their competitors. If people can grow and they have room to grow, I think money can be very useful, Masayoshi Son said in SoftBank’s earnings call with analysts this week. Historically, “whatever the revolution was, always money was necessary, he said.

The strategy can backfire. Wag Labs, a dog walking startup, was reportedly seeking $75 million in funding and ended up with $300 million from Vision Fund. It sought to use the money to go international and add services like dog grooming, but the expansion failed (paywall) and it fell behind rivals, according to the Wall Street Journal.

Vision Fund has gotten attention for its misses, but executives say it has successes, too. Rajeev Misra, chief executive of SoftBank Investment Advisers, which oversees the Vision Fund, says it has about 50 winners in its portfolio, according to a Reuters report. The fund had invested in about 88 companies at the end of last year. Misra told a conference in Abu Dhabi that a dozen or more of its investments could seek IPOs during the next 18 months.

Greensill and OakNorth, meanwhile, say they can handle their tall stack of SoftBank cash. “Our goal is to continue to be profitable but at extremely high growth rates,” said Joe Hyland, chief marketing officer at working-capital lender Greensill. Having the money and having all this dry powder in reserves for international expansion, for acquisitions, is really important,” he said at the Innovate Finance event in London this week. “If youre focused on growth and focused on being a market leader, the more money you have the better.

Despite the benefitsplenty of capital and lots of connectionshas SoftBank’s investment become a distraction? The CFO at OakNorth, which lends to small- and medium-size companies, said it really depends on whether the money is being spent wisely and alters the company’s outlook. “Me, as a CFO, I havent changed my mindset,” she said.

With reporting assistance from Alison Griswold.

Trump congratulates Sanders on Nevada caucuses: 'Don’t let them take it away from you' Following Sen. Bernie Sanders', I-Vt., projected win in the Nevada caucuses on Saturday, President Trump tweeted his congratulations and advised the progressive lawmaker to guard his victory closely.

the guardian - 42 minutes ago

What will Trump's visit do for US-India ties? This visit is a genuine opportunity to explore how the two countries can shape the 21st Century.

Child bullied over dwarfism leads out all-star rugby team as crowdfunding nears half a million dollars 'We've got your back,' fullback Rabbitoh Latrell Mitchell tells nine-year-old after ordeal

Patricia Grace's literary legacy: giving Māori characters their 'natural' voice As Grace’s 1986 novel Potiki is republished in Britain, the writer talks about culture, politics and activism“We live by the sea, which hems and stitches the scalloped edges of the land,” writes New Zealand author Patricia Grace of the beachside town that is the setting for her novel, Potiki. The land in the book bears a striking resemblance to the settlement where Grace lives, and walking up the coastal road to her home in Hongoeka Bay, north of Wellington, you can see things the way her characters do: the dark morning sea, “strident bands” of gulls, and the capital’s notoriously “edged wind”.In 1975, Grace, now 82, was the first Māori woman to publish a book of short stories in New Zealand, despite the fact that she had not – by the time she finished high school – read a book by a local writer, let alone an Indigenous one. Continue reading...

Courtside server spills tray of drinks at Portland game months after LeBron knocked her over Being a server can often be a thankless job, but for Katy Stevens, it can also get pretty messy.