Israeli Defense Minister Benny Gantz has accused Iran of likely being behind Friday's blast on an Israeli-owned transport ship in the Gulf of Oman, saying it's their "initial assessment" that the incident was an Iranian attack.
rt - 2 hours ago

A lorry carrying canned fruit overturned and burst into flames in north Staffordshire.
metro - 3 hours ago

Dog thefts soar by 170% during lockdown

Police have warned dog owners to be wary about posting their whereabouts on social media in case it reveals their pet's location - in the effort to combat a worrying rise in dog thefts.
channel 4 - 4 hours ago

Anas Sarwar has become the new leader of the Scottish Labour party - after defeating Monica Lennon in the leadership contest.
channel 4 - 4 hours ago

The family of Captain Sir Tom Moore have described him as a 'beacon of light and hope to the world' - as they paid tribute at his funeral service in Bedford.
channel 4 - 4 hours ago

The Chancellor Rishi Sunak has warned that he'll have to make some tough decisions in next week's Budget in order to repair the gaping hole in the public finances caused by the pandemic.
channel 4 - 4 hours ago

Hundreds of demonstrators have gathered in Dublin to protest Ireland’s restrictive lockdown policies. But the Saturday gathering soon turned violent, as police were pelted with bottles, cans, and even fireworks.
rt - 5 hours ago

A recent series of surveys found numerous areas of overlap in the morality of believers and the non-religious, but also distinguished key differences in terms of group identity versus individuality in guiding people’s morality.
rt - 6 hours ago

An Israel Defense Forces trooper died after an officer accidentally shot him in the head, but his family decided to donate his organs, reportedly saving a coronavirus patient with wrecked lungs and a man who needed a heart.
rt - 6 hours ago

The Met Police Federation has warned the ‘deeply disturbing’ situation is ‘going to get even worse’ as lockdown lifts.
metro - 7 hours ago

A total of 19,682,048 people have now received the first dose of a coronavirus vaccine.
metro - 7 hours ago

The World Economic Forum (WEF) has taken down its tweet that claimed lockdowns have been “quietly improving cities,” and admitted that is not the case. But the backdown didn’t spare the globalist titan from a new wave of mockery.
rt - 9 hours ago

Murder most fowl? Fighting cock that killed owner with three-inch knife to appear in court in India

A rooster named Raja will appear in court in India after he killed his owner with a knife while attempting to flee an illegal cockfight.
rt - 10 hours ago

The recent US air strikes on Iran-backed militias in Syria has shown that Washington is seeking to “revive” terrorism in the region and support now-shattered Islamic State (IS, formerly ISIS), a senior Iranian official has said.
rt - 11 hours ago

Clashes have erupted between Athens police and protesters supporting a jailed far-left hitman, who was hospitalized after a long hunger strike. Officers deployed irritant gases in an attempt to muscle the mob into a metro station.
rt - 15 hours ago

The Syrian government denounced the US airstrike on the border with Iraq as an act of aggression contrary to international law, as President Joe Biden told reporters he ordered the strike as a warning to Iran.
rt - 1 day ago

Punk icon Poly Styrene remembered by her daughter in documentary

Daughter of punk icon Poly Styrene makes a documentary about her mother's life called 'I am a Cliche'.
channel 4 - 1 day ago

The Supreme Court has ruled that Shamima Begum cannot return to the UK to fight her citizenship case.
channel 4 - 1 day ago

At least five people were killed and more than 170 wounded in clashes between anti-government protesters and security forces in Iraq's fourth largest city, Nasiriyah, according to local reports.
rt - 1 day ago
LOAD MORE NEWS

One of QAnon’s Biggest Influencers Is a Failed Hollywood Screenwriter

Neon Revolt, one of the most prominent QAnon influencers who has spread conspiracy theories and fomented violence among his hundreds of thousands of loyal followers on far-right social network Gab, has been unmasked as a failed Hollywood screenwriter.

Robert Cornero Jr. from Neptune City, New Jersey, has been identified by researchers working for fact-checking group Logically, who found that the company used to publish a book by Neon Revolt about QAnon was registered in Cornero’s name and to his family’s home address.

Cornero moved from New Jersey to Studio City in California over a decade ago to pursue a career as a scriptwriter. And even though he had never had any success producing a script of his own, he set up a website called Hacking Hollywood, where he offered to coach aspiring screenwriters.

But his experience in California was not a success, and it soured his view of Hollywood.

“BURN IT!” he wrote on his now-deleted Twitter account in 2018. “BURN THE WHOLE DEGENERATE TOWN DOWN! GLASS THE ENTIRE WEST COAST IF YOU HAVE TO.”

It was around this time that Cornero became interested in QAnon, which at the time was just a month-old movement with a very small following on fringe websites like 4chan.

Soon, Cornero returned to his family home and set up his alter ego Neon Revolt, launching a blog, and quickly establishing himself as one of the leading voices within the QAnon cult.

“Neon is one of the most prominent QAnon influencers in that community, writing extremely long screeds on his blog that tie together countless elements of various plots and conspiracy theories that have nothing to do with each other,” Mike Rothschild, a conspiracy theory researcher who is currently writing a book about QAnon, told VICE News.

“His persona is that of a paranoid and xenophobic embittered screenwriter flying the flag of traditional conservative values in the liberal cesspool of Hollywood.”

In 2019, Cornero leveraged his position of trust among his followers when he launched a crowdfunding campaign to write a QAnon book. He raised $150,000 and ultimately produced the 660-page “Revolution Q: The Story of QAnon and the 2nd American Revolution,” which has become one of the most influential texts among the QAnon community.

But rather than giving copies to the people who had donated money toward the book’s production, Cornero turned around and sold the book back to the same followers who had already given him money.

The book is still available to buy on Amazon. 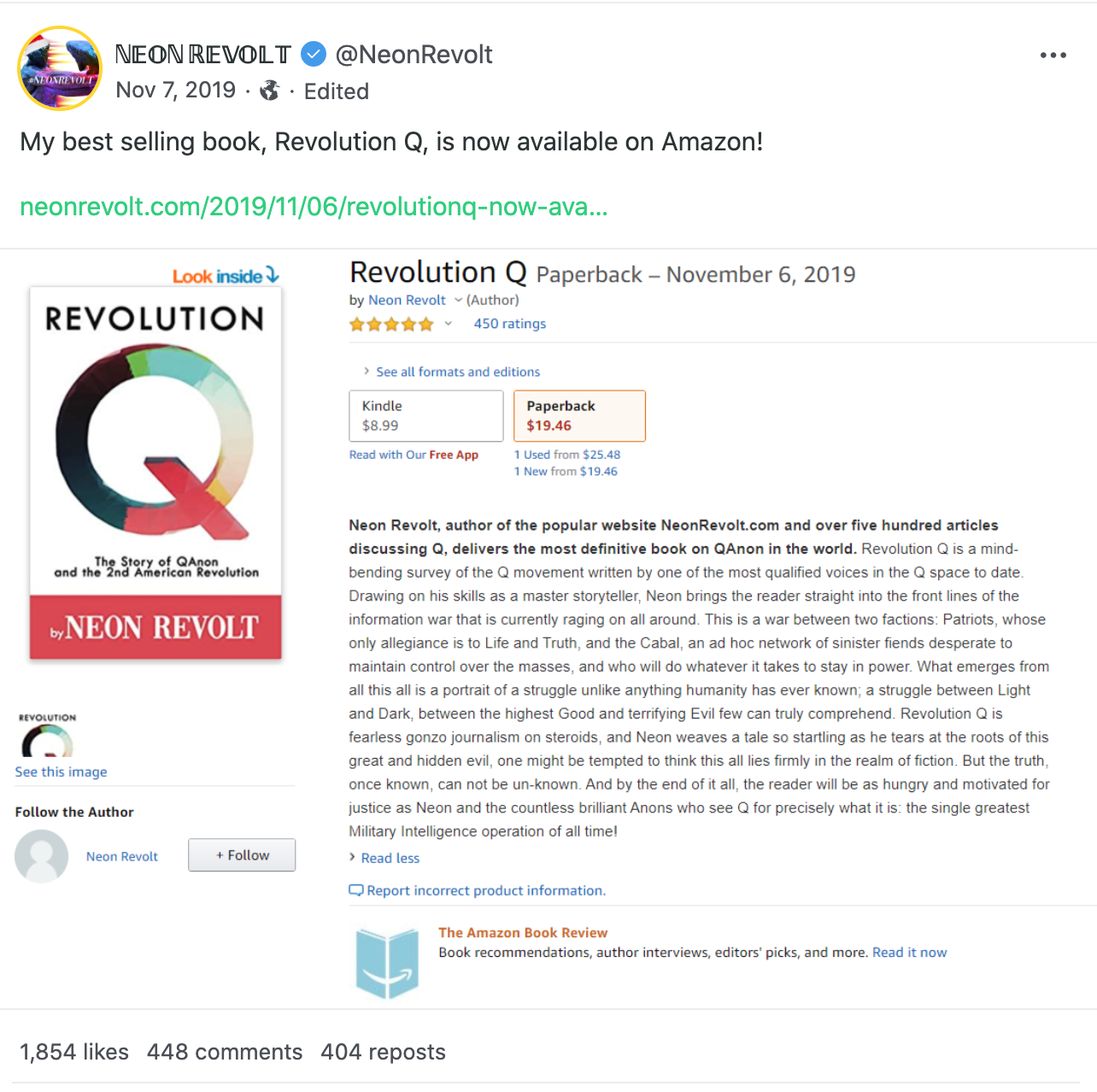 This grift led some in the QAnon community to label Cornero a “paytriot” — a term used to criticize those who seek to exploit the QAnon movement for financial gain.

But these criticisms seemed to have little impact on Cornero’s influence. While he never had a presence on Twitter, his blog continued to be influential and he has established a following of over 635,000 on the far-right social network Gab.

Cornero’s influential position within the QAnon world was highlighted once again last month when a hacker obtained a copy of an email server used by the owners of 8kun, the website where the anonymous creator of QAnon posts updates.

An analysis of the email communications by investigative reporters at Bellingcat found that Cornero was in frequent contact with the site’s owner Jim Watkins — though the content of the emails is unknown.

On the morning of the Capitol riots, Cornero published a series of three blog posts that claimed to finally prove the claims of election fraud that President Donald Trump had been making for months.

In fact, the “evidence” produced was little more than a rehash of previously disproven conspiracies that Cornero had been fed by Jim Watkin’s son Ron, who himself is a major influencer within the QAnon community.

“[Cornero] was a big part of it,” Rothschild said. “Ron Watkins used a three-part blog that Neon wrote as an ‘earth-shattering bombshell’ that would deliver the election to Trump. His blog and Gab account are like a journey through madness.”

Cornero did not respond to a request for comment.

the guardian - 34 minutes ago

Holly Willoughby 'facing legal battle worth millions with former agents' Holly Willoughby is said to have hired lawyers to fight demands for commission from her former managers, YMU Group, which could end up costing her millions

Jimmy Hoffa FBI files that have been hidden since 1975 must be released, lawmakers tell DOJ What happened to Jimmy Hoffa may soon be known, if the government reveals what it has kept hidden for decades.

Commuters to be offered flexible rail season tickets 'by June' as lockdown eased Workers will be able to use the new flexible season tickets for two or three days a week, potentially saving them hundreds of thousands of pounds, it is reported

Roger Stone, at CPAC, says he'd back Trump in 2024 but warns Dems, media will try to 'bury' accomplishments Political operative Roger Stone told Fox News on Saturday that he would support former President Donald Trump if he decided to run for the White House in 2024 -- but warned that anti-Trump forces would seek to “bury” his accomplishments.

Rishi Sunak to unveil £5,000,000,000 grant scheme for businesses hit by Covid Pubs, restaurants, shops and other businesses hit hardest by the pandemic will be boosted as lockdown eases.

Emmerdale star Jeff Hordley opens up on his grandma's hilarious age observation Emmerdale actor Jeff Hordley is celebrating 21 years of being on the ITV soap. However his gran had a blunt observation for him after watching a recent episode