The dog ripped the cow's tongue out.
metro - 9 hours ago

Around 16 people in every million are dying from the virus, new data has revealed.
metro - 10 hours ago

China, other governments and the WHO itself didn't act fast and decisively enough against the novel coronavirus, allowing it to become a pandemic, an interim report by an independent WHO panel on the handling of the crisis states.
rt - 10 hours ago

A Russian judge has imprisoned the opposition leader Alexei Navalny for 30 days. The hearing took place not in court, but a police station, with Navalny’s lawyer given barely any notice. The UK and other European countries are understood to be weighing possible further sanctions.
channel 4 - 10 hours ago

In just over 40 hours, on Wednesday early morning, President Trump will leave the White House to fly to West Palm Beach in Florida, skipping the inauguration ceremony of his successor – the first outgoing President to do so since Andrew Johnson in 1869.  If there has been an element of continuity in Trump’s presidency,…
channel 4 - 10 hours ago

In the last few minutes MPs have voted to support the extension of the temporary £20 a week increase in universal credit.
channel 4 - 10 hours ago

With a new incoming President in the White House, that is also going to mean a new US ambassador in the United Kingdom. Like Donald Trump, the man who’s been in charge of the embassy for the past three years has proved to be a controversial figure. The former deputy chief of mission at the…
channel 4 - 10 hours ago

There is a vaccine story in Washington too – 30 million doses delivered so far, but only 12 million have ended up in people’s arms. President-elect Biden intends to change that quickly. Today, he visited a food bank as Americans celebrate the birth of Martin Luther King Jr. King was assassinated and there are fears of similar…
channel 4 - 10 hours ago

ore than four million people have had a first dose and from today the over-70s in England are being offered jabs.
channel 4 - 10 hours ago

Although vaccination numbers are rising sharply, hospitals remain under intense pressure. The number of patients with coronavirus in UK hospitals is the highest that it's been throughout the pandemic.
channel 4 - 10 hours ago

Police in Guatemala have started breaking up a caravan of hundreds of mostly Honduran migrants who had camped on a street while trying to reach the US, after their journey was halted by officials, migration authorities have said.
rt - 11 hours ago

In a milestone breakthrough, astronomers have discovered the oldest supermassive black hole ever seen. The extraordinary find dates back to the early days of the universe and fuels the most distant quasar yet known.
rt - 13 hours ago

Health officials in the Chinese province of Hebei will review hundreds of thousands of Covid-19 tests carried out by third-party agencies after it was revealed that one laboratory allegedly hid positive cases of the disease.
rt - 13 hours ago

The FBI is reportedly concerned about National Guard troops with far-right and extremist views and affiliations.
vice - 14 hours ago

The Boeing 737 MAX aircraft is set to return to service in Canada following a flight ban of almost two years, which was imposed after crashes that killed hundreds of people, the country's transport regulator said on Monday.
rt - 14 hours ago

Opposition politicians in India have called for an investigation into a potential national security leak after a TV anchor’s messages showed he had prior knowledge of airstrikes launched against Pakistan in February 2019.
rt - 14 hours ago

Iran’s most senior general has ridiculed the US after American armed forces and the national guard were brought in to protect Washington from any further violence during the week of Joe Biden’s inauguration as president.
rt - 15 hours ago

The German government is considering the extension of the country's lockdown into February following the detection of new variants of Covid-19 and persistently high numbers of infections.
rt - 15 hours ago 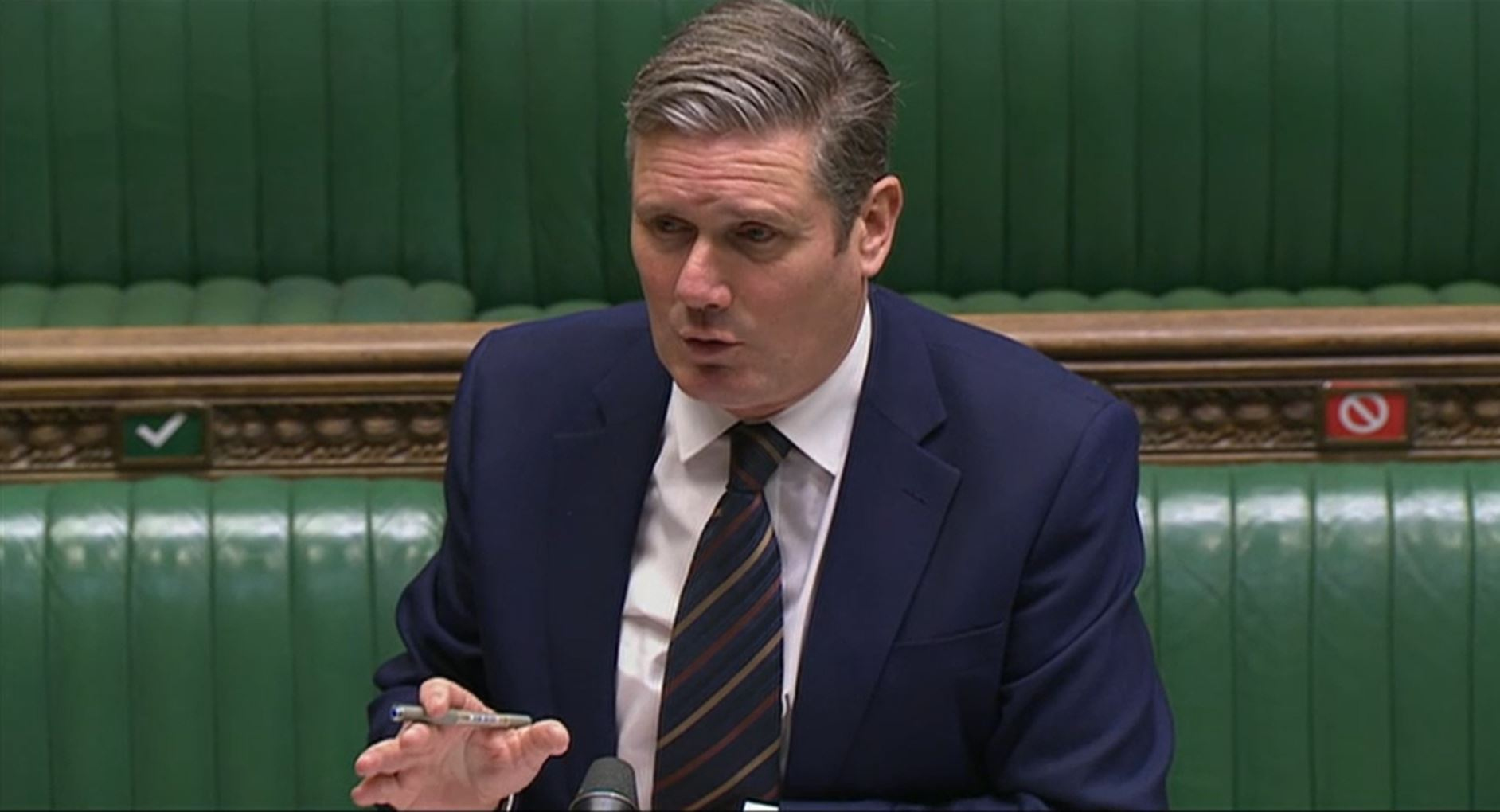 The Labour Party is leading the polls in Red Wall constituencies – reversing the position from last years election – according to exclusive polling for Channel 4 News.

The survey, by research company J.L. Partners, suggests the Conservatives are struggling to hold on to the support they won in 2019.

Many cited confusing messaging over Covid, and Dominic Cummings’s trip to Barnard Castle.

If this were translated into votes, researchers estimate that Labour could win back 36 out of 45 seats they lost in the last election.

Voters said that confusing messaging over Covid was a major negative for Boris Johnsons party.

Many also cited Dominic Cummingss trip to Barnard Castle during lockdown as an important factor – feeding a sense there was one rule for the elite and another for ordinary people.

In the Red Wall, Boris Johnson has a negative rating of 3%, while Keir Starmer is on +18%. But Conservatives still fare better on certain issues, like the economy and defence.

Some voters (16% of 2019 Conservative voters) say they now do not know how they would vote in a General Election, while others (7%) are switching directly to Labour.

If there was an election today, polling suggests the Conservatives would only hold on to nine of the 45 seats they won in 2019 – all but wiping out their majority.

However, chancellor Rishi Sunak has emerged as the most popular politician in Red Wall constituencies.

Canada plans to sell Keystone XL for scrap if Biden kills project The Canadian province that invested in the crude pipeline is looking to sell it to recoup some of its $1.1bn.

Landlocked Lesotho faces food crisis amid Covid border closures Food price increases and economic impact of lockdowns have left a quarter of the kingdom’s population reliant on food aid, UN warnsCoronavirus – latest updatesSee all our coronavirus coverageAlmost a quarter of Lesotho’s population will require food aid between January and March as a result of Covid-19 restrictions, the UN Food and Agriculture Organization (FAO) has warned.More than 580,000 people out of a population of 2.2 million are estimated to be food insecure, despite predictions of normal to above average rains this year and the potential for above average cereal production. Continue reading...

Zayn Malik worries fans as he smokes, drinks beer and eats pizza at 6am Zayn Malik was seen on an Instagram Live lighting up what some thought was weed and sipping on a bottle of beer while eating pizza

Tommy Hilfiger sells his $45M mansion, reportedly moving to Florida Fashion icon Tommy Hilfiger has finally sold his massive Connecticut mansion for $45 million and will be moving more than 1,250 miles down south.

Majority of Europeans say China will overtake 'broken' US within decade Survey finds more Europeans than not say US cannot be trusted after four years of TrumpA majority of Europeans believe America’s political system is broken, that China will be the world’s leading power within a decade, and that Joe Biden will be unable to halt his country’s decline on the world stage, according to a report.While many welcomed Biden’s victory in November’s US election, more Europeans than not feel that after four years of Donald Trump the US cannot be trusted, according to the study by the European Council on Foreign Relations. Continue reading...

the guardian - 59 minutes ago

‘Chilling’ crackdown on dissent in Vietnam ahead of key congress Reuters tally finds 280 people arrested for 'anti-state' activities in the five years since the last party congress.

Makers of Amazon Prime show apologise after outcry by India’s BJP Politicians from governing party call for show to be removed, saying it was 'deliberately mocking Hindu gods'.

Clinton suggests Putin may have known about riot in Capitol, Pelosi wants 9/11 commission-type probe Hillary Clinton, the former secretary of state, spoke with House Speaker Nancy Pelosi on her podcast about the riot at the U.S. Capitol earlier this month and hinted that Russian President Vladimir Putin may have been receiving updates about the chaos from President Trump.

'Much-loved' man, 29, killed in crash while out jogging at UK accident blackspot Ex-Aston Villa striker Stan Collymore was among those who paid tribute to marketing manager Jack Ryan, 29, who was knocked down by an oncoming Range Rover last week