Minsk pact on Ukraine ‘must be implemented’ to ‘build trust,’ PM of Albania, who also holds OSCE chair, tells RT

Albanian prime minister and OSCE chairperson-in-office Edi Rama has said that the Minsk agreements on the Ukraine conflict “need to be implemented” in their current form in order to “build trust” before they can be reviewed.
rt - 20 minutes ago

It Took 120 Years But the U.S. Just Made Lynching a Federal Hate Crime

Only four members of the House voted against the bill.
vice - 21 minutes ago

Diana Choyleva is the Chief Economist for Enodo Economics - a macroeconomic and political forecasting company that focuses on China, and Katie Martin is the Capital Markets Editor for the Financial Times.
channel 4 - 26 minutes ago

In a world which depends on global trade, the coronavirus is causing economic mayhem.
channel 4 - 28 minutes ago

Most investigations into drug deaths in Scotland a ‘token effort’, says police officer

The drugs death rate in Scotland is now among the worst in the world.
channel 4 - 36 minutes ago

The FBI Just Arrested a Bunch of Neo-Nazi Atomwaffen Members

It's the biggest bust of the notorious group ever.
vice - 41 minutes ago

Communities faced with flooding have been warned tonight that it could last for another 10 days.
channel 4 - 52 minutes ago

President Trump has laid into the media - accusing them of fuelling fears about the coronavirus and insisting his administration was doing a "great job".
channel 4 - 53 minutes ago

The coronavirus is spreading, with Pakistan being the latest to declare its first cases -  and so is fear of the unknown.
channel 4 - 58 minutes ago

Health Secretary Matt Hancock told MPs a wider public information campaign will be rolled out - insisting the government had a "clear plan to contain, delay, research and mitigate" the coronavirus outbreak.
channel 4 - 58 minutes ago

Exclusive: former youth footballer says he was trafficked as a child from Scottish to English football - where he was abused by paedophile Barry Bennell
channel 4 - 1 hour ago

Under Bob Iger, Disney took over the world

Depending on whom you ask, Iger either turned Disney into the best brand on Earth or a monstrosity that monopolized culture.
quartz - 1 hour ago

The growing list of world events canceled due to coronavirus

Fear over the spread of the disease has already disrupted schools and cruise ships. Now, it's coming for your social and professional calendar, too.
quartz - 2 hours ago

German Health Minister Jens Spahn has said that his country is facing a “coronavirus epidemic.” Since breaking out in northern Italy, the deadly COVID-19 virus has spread to more than a dozen European countries.
rt - 2 hours ago

He allegedly participated in a swatting campaign targeting politicians, a historically black church, and journalists.
vice - 3 hours ago

The reason: “deadheading,” the miles that ride-sharing drivers travel between trips with passengers.
vice - 3 hours ago

‘Violent criminal beheaded his grandmother and left her head in backyard’

Kenny McBride, 45, is charged with felony open murder and mutilation of a dead body.
metro - 3 hours ago
LOAD MORE NEWS 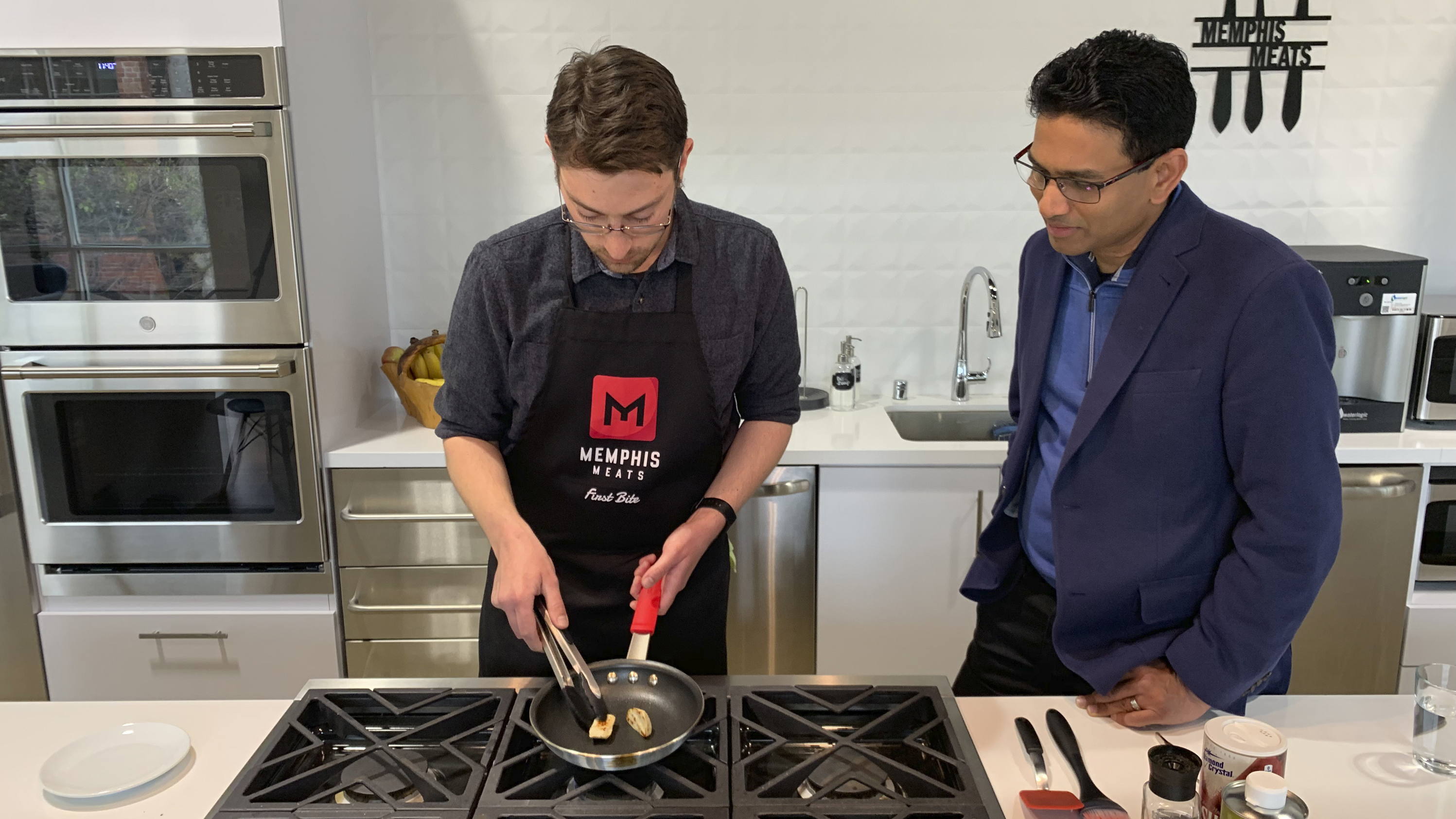 One of the leading Silicon Valley startups making high-tech, cell-cultured meat says it’s about to build the first pilot production plant in the United States.

California-based Memphis Meats today announced it closed a $161 million Series B funding round, much of which will go toward building the plant in the Bay Area. Once operational, the facility will grow meat from animal cells without having to slaughter a single creature. The plans for a new plant signals Memphis Meats is ready to begin scaling up the volume of meat it can produce, which will eventually help drive the cost of its products down to an acceptable level for consumers.

Globally, Memphis Meats is only the second cell-cultured meat company to announce plans for a pilot facility. In October 2019, Israel-based Future Meat Technologies said it is building a 10,700 square-foot facility in Rehovot, just south of Tel Aviv. That startup will aim to put a hybrid cell-cultured and plant-based product on the market sometime in 2021, followed by a cost-competitive, 100% cell-cultured chicken product by 2022.

Memphis Meats did not release specific details about where its pilot facility would be located, how big it would be, or how many of its custom-built bioreactors would be housed inside. Bioreactors are crucial components of any cultured meat production facility; they’re where the animal cells will grow and proliferate. CEO Uma Valeti did say, though, that his company’s first marketed meat would be 100% cell-cultured.

“I don’t want to be first to market unless we are the best on the market,” Valeti says.

The development is a big one for the companies vying to get cell-cultured meat to market. There are around 30 cultured startups around the world, with a handful in the US including JUST, Mission Barns, Finless Foods, and New Age Meats. For years, cultured meat companies have shown photos and offered rare tastings of meat products grown in small batches. Some are approaching the moment when they can start scaling up their technologyand Memphis Meats and Future Meat Technologies have just raised the stakes for those competitors.

The new pilot plans are also noteworthy from a regulatory standpoint. No government on the planet has given cell-cultured meat a green light to be served to consumers. Working closely with the US Department of Agriculture and the US Food and Drug Administration, Valeti says he hopes to work with regulators in his new pilot facility.

“The regulators would like to see that we have good manufacturing practices,” he says. “When they come to the plant they should be able to see high-quality cells, high-quality feed, and a clean production plant.”

Valeti said the funding round also helps his company make inroads into markets in China, Australia, and New Zealand. Two of its three lead investors, SoftBank Group and Temasek, are from Asian nations, giving investors in that region of the world more exposure to the work happening in Memphis Meats’ labs (the third is Norwest, of California).

Memphis Meats’ funding roundwhich will also go toward tripling its headcount from 45 to 135received additional investments from Bill Gates, Richard Branson, Threshold Ventures, Cargill, Tyson Foods, Finistere, Kimbal Musk, Fifty Years, and CPT Capital. Since its founding, the company has raised close to $180 million, making it the top fundraiser among startups working exclusively on cultured meat. But that shouldn’t discourage competitors from entering the race to scale: Future Meat Technologies is diving into its plant with just $14 million raised.

Florida deputy shoots ax-wielding man who busted into her home, sheriff says An ax-wielding Florida man picked the wrong home to break into Tuesday night when he busted down a sheriff’s deputy’s door and was shot multiple times, authorities said.

GOP rep shouts down hearing witness for claiming nobody has died due to gun restrictions A House Oversight Committee hearing on voter suppression in minority communities erupted into a shouting match Wednesday when Rep. Thomas Massie, R-Ky., tried to draw parallels between laws that restrict people's ability to vote -- like ID requirements and restrictions on ex-felons -- and gun control measures.

Sister of victim told brother-in-law ‘we forgive you’, murder trial told Rafal Karaczyn (34) has pleaded not guilty to the murder of his wife Natalia Karaczyn (30)

2020 polls: Biden leading heading into South Carolina with Steyer a surprise second Margin of error is 3.8 per cent and includes the responses of 650 individuals

Storms cause massive hole to open up in bridge at national park in the UK A series of storms in recent weeks blamed for damaging flooding and landslides in the United Kingdom is also being blamed for the collapse of a bridge at a national park.