Yotam Ottolenghi is an Israeli-English chef, restaurant owner and food writer who taught Britain to love vegetables. He has published seven best-selling cookbooks inspired by his Middle Eastern upbringing in a German/Italian family and owns six restaurants and deli’s across London. Since arriving in London over 20 years ago, Yotam Ottolenghi has made it his…
channel 4 - 13 minutes ago

Jayson Aribe is a professional motorcycle racer who has been helping to fight fires in California.
metro - 58 minutes ago

Trump won Pennsylvania by a hair in 2016, and right now he's polling 10 points behind Biden.
vice - 1 hour ago

A deputy in the same Georgia county was fired after video of him repeatedly punching a Black man pinned to the ground went viral.
vice - 1 hour ago

Yerevan’s claims that a Turkish F-16 attacked and destroyed an Armenian Su-25 fighter jet are false, a Turkish presidential spokesman insisted, echoing the position voiced by the Azeri Defense Ministry.
rt - 2 hours ago

French President Emmanuel Macron has used colorful language to describe what would happen if EU lawmakers remained in Brussels indefinitely, arguing that concerns about Covid-19 should not stop them from meeting in Strasbourg.
rt - 2 hours ago

Police on Tuesday dismantled a camp of at least 700 migrants in the French port city of Calais, the biggest such operation since the ‘jungle’ shantytown was broken up four years ago.
rt - 2 hours ago

Christin Evans was the victim of a 'racist' swatting incidents where officers stormed her dorm room over false reports.
metro - 2 hours ago

The Emir of Kuwait, Sabah Al-Ahmad Al-Jaber Al-Sabah, who ruled the oil-rich Gulf country for 14 years, has died at the age of 91, state television reported on Tuesday.
rt - 3 hours ago

While children have shown a stronger immune response to the coronavirus, more than 600,000 kids in the U.S. have tested positive so far.
vice - 3 hours ago

Mail-In Ballots Are Already a Mess in New York

Some voters received return envelopes with someone else's name and address on them.
vice - 4 hours ago

The Covid-19 per-capita death rate in Israel is higher than that of the United States for the first time since the outbreak of the pandemic, that country’s military intelligence reported on Tuesday.
rt - 4 hours ago

Australia is deploying defense personnel to Port Hedland on its northwest coast to help contain a coronavirus outbreak on a bulk carrier, where 17 of the 21 crew members have tested positive.
rt - 4 hours ago

‘A terribly difficult and lonely death’: WHO laments 1 million Covid-related deaths worldwide but says virus can be suppressed

The World Health Organization (WHO) has expressed its grief over the global death toll from coronavirus surpassing one million, while adding that the illness could be reined-in with time.
rt - 5 hours ago

Saudi Arabia claims to have uncovered an Iranian-trained terrorist cell, arresting 10 people and seizing a stash of weapons and explosives in a farmhouse. However, Tehran has dismissed the report as “complete fabrication.”
rt - 5 hours ago

Beijing has urged US politicians not to use China to score cheap points before November’s election, lamenting that America’s leaders are conjuring up imaginary threats, including allegations of election interference.
rt - 6 hours ago

‘Everybody dies’: Musk says neither he nor his family will take Covid-19 vaccine, blasts Bill Gates as ‘knucklehead’

SpaceX and Tesla founder Elon Musk has said that neither he nor his family will likely take future coronavirus vaccines even when they are readily available, saying the pandemic has “diminished [his] faith in humanity.”
rt - 6 hours ago

The number of people dying from cornavirus in England and Wales has risen for the second week in a row, worrying new figures show.
metro - 7 hours ago
LOAD MORE NEWS 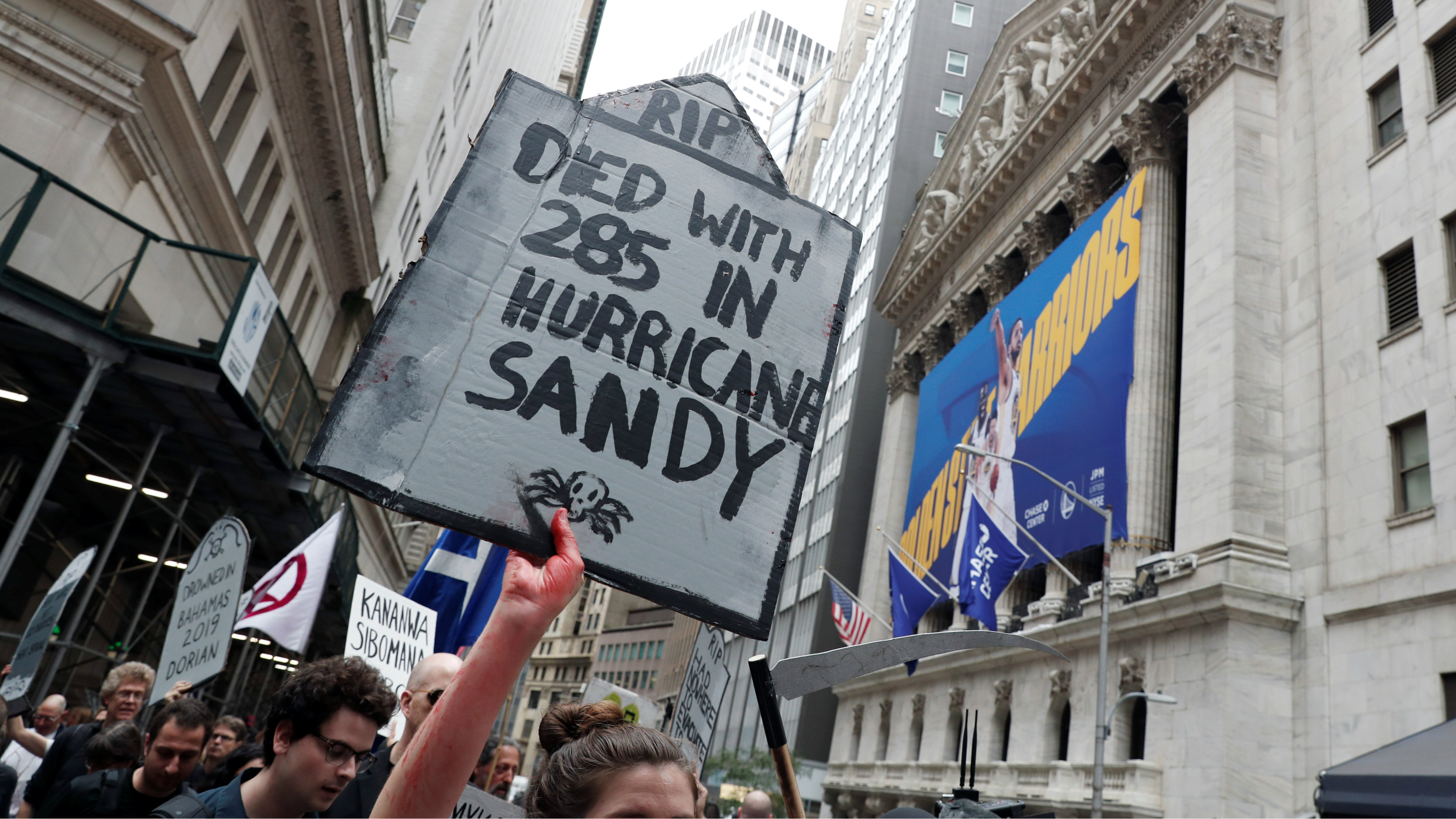 BlackRock, the world’s biggest asset manager, is under pressure from activists to block funding for companies that contribute to climate change. Protestors have also taken aim at the New York Stock Exchange, the world’s largest by market capitalization of the firms listed there. Should these financial titans that serve as conduits between investors and companies be the ones to decide who gets funding?

Investors should have the right to choose,” Cunningham said during a panel discussion today at the World Economic Forum in Davos, Switzerland. “Its a really slippery slope if we start to decide for them what opportunities they should have access to.

In some ways, BlackRock and NYSE are in similar positions. They don’t necessarily decide whether money flows into companies that extract oil or coal, or into firms that don’t recruit a diverse suite of executives and board members. But they do enable money to pour into all sorts of companies, and that is an increasingly controversial proposition.

BlackRock doesn’t own the $7.4 trillion in assets (pdf) it manages; the money is allocated and directed by individuals and outside professional investors. The asset manager creates index and exchange-traded funds, as well as actively managed funds, and investors decide which ones to put their money in. NYSE, meanwhile, lists stocks on its exchange, and investors decide which of them to buy or sell.

That said, it’s not like anything goes. NYSE has thresholds for a company to qualify for stock listing (pdf): among other things, a firm must have certain number of shareholders and a minimum market capitalization. Environmental and social criteria aren’t among the requirements. Cunningham says NYSE, owned by Atlanta-based Intercontinental Exchange, has made it easier for investors to make decisions about the environmental, social, and corporate governance credentials of listed companies. “We provide data, we calculate a lot of metrics around ESG issues,” she said.

Last week, BlackRock chief Larry Fink wrote letters to CEOs and clients that focused on sustainability. He said climate change is a crucial for determining companies’ prospects in the long term, and that BlackRock is improving sustainability disclosures for shareholders, while making sustainability a standard offering for investors. Ultimately, though, the choice is the clients’ to make, according to the company’s website: “The investments we make on their behalf will always represent their preferences, timelines and objectives.”

Goldman Sachs CEO David Solomon was asked a similar question during the Davos panel: would the investment bank turn down a client because of these issues? Solomon said the company, in its roles as an investor, advisor, and financier, thinks about “the reputational association of being involved with certain businesses.” But he sidestepped the bigger question about whether Goldman would work with certain energy companies, or with firms that that don’t make diversity a priority.

“Youre looking for a line? Theres not a line,” he said. “Theres a transition going on, where people are thinking differently about how they want to direct capital to try to promote sustainability.

He added that it will be “a multi-decade transition” in the way investors allocate capital. The activists taking aim at his and other financial firms that facilitate fundraising won’t be willing to wait that long.

Protect the world from sliding into global recession, urges UN chief The economic and social consequences of the COVID-19 pandemic “are as bad as we feared”, the UN Secretary-General said, as he warned that the international community must act now if it is stave off a global recession, which could wipe out decades of development gains.

Dramatic day for Nathan Moscrop sees winner disqualified The rider managed to stay on Wherewouldugetit despite a slipping saddle, but on his next ride at Sedgefield he was disqualified after winning on Major Snugfit

RAF hero who flew through nuclear bomb blast nominated for medal 42 years later EXCLUSIVE: Eric Denson was exposed to 165 years’ radiation after flying through a nuclear bomb blast on Christmas Island for just six minutes in 1958. His widow Shirley has campaigned for him to be recognised

EuroMillions results - get the winning numbers for Tuesday's £15m jackpot Results checker and live draw for the EuroMillions Lotto draw with the National Lottery on Tuesday, September 29. The jackpot is an incredible £15million so get those tickets ready

Julian Assange could end up at Colorado Supermax prison, former warden says WikiLeaks founder Julian Assange would have to be “almost dying” to get out of arguably the most notorious prison in the United States if convicted of espionage charges and sent there, a court at London's Old Bailey heard Tuesday.